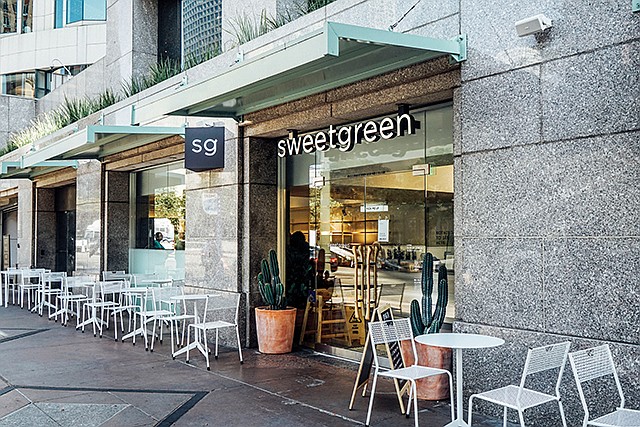 For a company that makes salads, an investment into the technology best known as the structural underpinning of bitcoin might seem strange, but Sweetgreen’s strategy involves securing a rapidly expanding supply chain, not a sudden turn into the cryptocurrency market. Blockchain technology essentially is a ledger system that allows data to be digitally recorded, tracked and distributed but not edited, which can be helpful for a growing company with a complex supply chain.

“For food, real-time traceability is powerful,” Nicolas Jammet, chief concept officer and co-founder of Sweetgreen, said. “In today’s world, customers are more thoughtful, aware and conscious about where their food comes from and being able to share that information with them is key.”

Having it built into the company’s infrastructure is key as the company grows. Sweetgreen currently has 90 location and more than 4,000 employees. There’s also more pressure on the company after the recent funding round, which valued it at $1 billion, putting it in the rarified air of so-called unicorns such as Uber Technologies Inc., Lyft Inc., and Airbnb Inc.

The latest round of Sweetgreen’s funding was led by Fidelity Investments Inc. and brings the restaurant’s total funding to $365 million. The salad chain was founded in 2007 in Washington, D.C., and relocated its headquarters to Culver City in February 2015. Jammet declined to provide Sweetgreen’s revenue figures.

Restaurants including Sweetgreen are increasingly using the technology to track everything from payments and customer habits to food authenticity and safety, and supply chain efficiency.

“This (move to blockchain technology) makes sense. Sweetgreen is looking to increase transparency in its operations,” said Marta Belcher, an attorney at the East Palo Alto offices of law firm Ropes & Gray. Belcher specializes in and has clients in the blockchain space, including the Digital Asset Trade Association, an advocacy group for blockchain.

The benefit of using blockchain technology for the restaurant industry is that a lot of disparate sets of data and moving pieces can be collected and streamlined without worrying if they have been altered, according to Ron Galloway, founder of 818 Research, an investment advisory firm in Augusta, Ga.

“It’ll lock down supply chain purity,” he said. “Being able to track the produce all the way along the supply chain and pinpoint cases of contamination more quickly is why we’re seeing more food companies do this.”

The most high-profile blockchain move related to the food industry was made by Bentonville, Ark.-based Walmart Inc. in September.

The company announced it would use blockchain technology to keep track of leafy green vegetables like spinach and lettuce after conducting a two-year pilot program with IBM Corp. Walmart said at the time that it was a better way of pinpointing which batches might be contaminated. The company also gave a year’s notice to produce partners, giving every farm it works with until September 2019 to enter detailed information about their food into a blockchain database developed by IBM for the retailer.

Galloway said having the heft of a company like Walmart behind blockchain technology was reassuring for smaller food companies.

Blockchain can be utilized in other aspects of a restaurant’s business operations in addition to the supply chain, Galloway said.

“You can collect a lot of information on your customers; ultimately that’s the goal I assume − to use that data to sell more food,” he said.

Combining customer data with information about produce sourcing could lead to insights that help drive sales.

Jammet, the co-founder of Sweetgreen, said other uses of blockchain for the company would be things as detailed as measuring soil health.

“Understanding all the different variables that go into that growing a tomato, for example − tracing it from seed, when it was picked, shipped but also cut,” Jammet said. “We can figure out the variables, where the food was grown and how it affected the taste.”

“With these kinds of measurements, restaurants can predict how many people to expect on a Wednesday before Thanksgiving, how and what food they’ll want, and what supplier they’ll need to order from and when,” he said.

Still, there are some drawbacks to using blockchain, Ropes & Gray’s Belcher said.

“We are still in the very early days of blockchain tech. What we have now is like how the internet was in 1993,” she said.

And while data on the blockchain can’t be edited, errors can still occur.

“The input of what the data is, wrong information can be entered and then be irreversible,” Belcher added. “That’s a big problem we’re seeing around blockchain.”