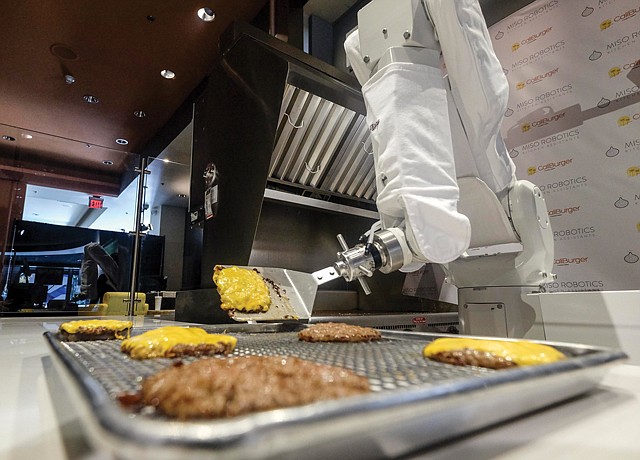 Zito told the Business Journal he conceived of Flippy after talking with CaliBurger Chief Executive John Miller about the challenges of training and retaining kitchen staff.

Add a rising demand for prepared food, and Miso’s founders felt there was enough market demand to try out the concept.

“The U.S. has crossed over to (having) 51 percent of food made for us rather than at home, and that increase in demand for fresh foods is putting pressure on restaurant operators. They’re looking to innovate and coming to us,” Zito said.

Flippy tackles what kitchen workers identified as the most unfavorable or undesirable part of the job, Zito said, allowing employees to focus on customized orders and the hospitality elements of a restaurant.

Zito said getting away from a searing grill or vat of hot grease improves staff morale as well. Zito added that Flippy’s penchant for keeping employees out of the warmest areas of the kitchen is especially valuable at Dodger Stadium, which was built in 1959 and doesn’t have air conditioning.

Flippy is an alluring new technology with growing potential, but its price needs to drop before it becomes a mainstay in kitchens nationwide, according to Jerry Prendergast, owner of Culver City-based restaurant consultancy firm Prendergast & Associates.

Besides licensing fees for point-of-sale systems, which can total roughly $6,000 monthly, Prendergast said paying $1,000 per month to maintain a piece of kitchen equipment is inordinately high.

“I would have to see it used in more locations, in more varied environments and see the price go down, so it makes sense to put in my kitchens,” Prendergast said.

Based on an estimated $15 minimum wage, Prendergast calculated the average human fry cook makes approximately $24,000 annually. Cutting a cook and operating Flippy for multiple shifts could save a restaurant owner up to $500 per week, he estimated.

Redundancy in case of a Flippy malfunction is another concern.

“If a cook calls in sick, I’m sure I have another to take the shift,” Prendergast said.

He did acknowledge that the robotic arm could help restaurant owners in markets like Los Angeles where the food service labor pool is shrinking.

“If I want someone relatively well trained, I’m paying them significantly more, not because of minimum wage but the reality of the labor market,” Prendergast said. “The L.A. labor market is particularly hard compared to everything else.”