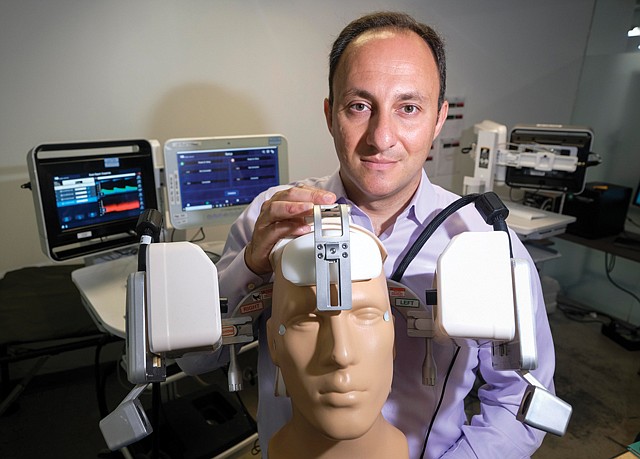 Medical-device company Neural Analytics Inc. has developed a portable headset that can assess several types of brain damage, from stroke symptoms to concussions and other disorders.

Founded in 2013 by Robert Hamilton, Leo Petrossian and Dan Hanchey in West Los Angeles, the company spent five years developing its technology. After winning U.S. and European regulatory clearance for its robotic ultrasound device this year, Neural Analytics is now taking it to market, starting with health care providers.

The company’s devices are a unique marriage of different high-tech elements, Hamilton, the company’s chief science officer, said. “Our focus is combining ultrasound technology with medical robotics and artificial intelligence.”

The Lucid Robotics System combines transcranial Doppler – an ultrasound technology – with a headset containing robotic wands that monitor blood flow to the brain. The noninvasive device is a “brand new” way of assessing brain disorders, Hamilton said. “We’re excited to get it out there.”

The headset uses machine learning to pinpoint brain disorders based on patterns in the data it gathers, company executives said. That makes it possible for the device to much more quickly identify the severity of a stroke, for example, and to alert doctors.

It also holds potential for use in diagnosing concussions, migraines, brain bleeding and dementia although those applications are pending approval.

The Neural Analytics system has the potential to simplify brain-injury diagnoses and thereby increase a patient’s chances of survival, executives said. The system will also compete against traditional ultrasound systems that require the presence of a skilled technician.

The Lucid system received federal clearance in May to monitor blood flow to the brain and shipped its first units to Erlanger Health System hospitals in Chattanooga, Tenn., in September. The cost per device wasn’t disclosed.

Neural Analytics said it’s developing a rugged, hand-held version of its headset for the Defense Department, to enable traumatic brain injury evaluations on the battlefield. It’s also working on other portable versions of its device developed specifically for emergency responders.

“We are leveraging technology in a very novel (way) to solve problems that have plagued health care for decades,” said Petrossian, the company’s chief executive.

Six years ago, Hamilton hatched his idea – a portable ultrasound device to measure and track brain health – while earning a doctorate in biomedical engineering at UCLA.

The Idaho native pitched it to a campus gathering hosted by UCLA’s Business of Science Center, which aims to foster innovation and business startups by bringing together students from engineering, business and other disciplines.

The ability to diagnose concussions anywhere from the football field to the battlefield garnered the interest of Petrossian, an entrepreneur with a doctorate in biomolecular nanotechnology. Hamilton and Petrossian also brought on Hanchey, a software engineer with nearly two decades of experience.

Together, they founded Neural Analytics.

Roy Doumani, executive director of the UCLA Business of Science Center and a co-founder of the California NanoSystems Institute, immediately saw market potential in the device.

Brain disorders cost the United States nearly $800 billion a year, of which more than half is spent to treat strokes, concussions, migraines and dementia, studies say. And with strokes striking nearly 800,000 Americans, timely intervention can save lives, according to a March 2017 study in the medical journal Annals of Neurology.

Doumani not only believed in the new company, he invested in it. He did not disclose how much he invested.

“The technology is good; it works,” Doumani, one-time board chairman for Neural Analytics, told the Business Journal earlier this year. “I believe it is unique … the good part is, you don’t need a tech in the ambulance to (operate) it, or a highly paid technician in the ER.”

Doumani said the market potential for this type of device is strong. “To the best of our knowledge, there is nothing as good or as accurate. … The doctors love it.”

Momentum is growing for Neural Analytics, now based out of an industrial-chic office building near the Metro Expo/Sepulveda Station.

The firm has raised $46 million in funding, including a $15 million Series B round in January led by Alpha Edison, a tech-focused venture capital company based in West Hollywood. The company expects to raise a Series C round of between $30 million and $50 million by December to assist with international expansion, executives say.

Neural Analytics also has landed more than $6 million in research grants, plus a $10 million contract from the Defense Department in 2017. Another $4.5 million DOD contract is pending, executives say.

Petrossian estimates that the global market for smart ultrasound products such as the Lucid Robotics System is between $10 billion and $15 billion a year. In order to grow, the company may need more manufacturing space, he said.

The company has also launched a global study of its Lucid Robotics System, with new research in the works for concussion, dementia and brain bleeds.

In the last six months, the Lucid ultrasound system has been tested in hospital operating rooms to assess stroke risk during heart surgery and it is now being studied for use in stroke and mild traumatic brain injury in a clinical trial at UCLA. Further studies are taking place across the United States and Europe. A study of the military version is expected to begin next year in San Antonio.

Hamilton said that, while there may be surgical systems that employ robotics and imaging companies that employ artificial intelligence, no biomedical company other than Neural Analytics has successfully employed both. He said the company expects a banner year in 2019.

“The most exciting thing about 2019 will be to expand the utilization of the Lucid Robotics System across the nation,” Hamilton said. “It’s going to give doctors and health care professionals access to information they previously didn’t have.”