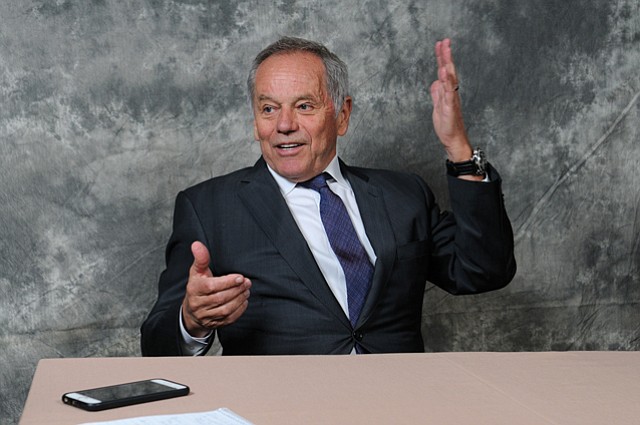 Celebrity chef and restaurateur Wolfgang Puck did not finish high school, but from an early age – 14 to be exact – he knew he wanted to be a chef. He left his native Austria for France and landed in the United States in 1973, opening up Spago in 1982. Spago was a hit, and its celebrity clientele helped pave the way for more restaurants and ventures into other business lines, including catering, TV and cookbooks. His Wolfgang Puck Worldwide now generates approximately $650 million in annual revenue.

Where is L.A. right now as a community unto itself? As a U.S. market? A global city?

Los Angeles is an internationally recognized city for great restaurants and great ingredients. You cannot disassociate the two – I think it really starts with the product. One of the things that I really liked about L.A. was all these [farmers] markets. I really believe L.A. has become a global city – everyone from everywhere wants to live here.

Where was the city in those respects when you started your business?

Forty years ago, it was a sleepy city. In downtown we have so many chefs now who open locations there and, in a way, it has become a new hotbed for new restaurants.

You mentioned L.A. has become a force in the restaurant industry. Has your business also been driven by the clientele here?

I think one of the great things about L.A. was that everything here was accepted more easily than say, New York. When I opened Spago and wrote “California Cuisine” on the menu, nobody knew what it was. That’s something we created here –we have all these different cultures in the city, and we have all these great local ingredients. So we used a little from the Japanese, from the Chinese, a little bit Italian, French, all mixed together. A that time it wasn’t normal for a cook like me, from Austria, to cook Chinese food, so it was interesting how we opened that door.

How do you stand out in a place like L.A. that has a vibrant foodie culture replete with food trucks? How do you compete?

We opened a restaurant called Rogue. We release menus every Monday – it’s a ticket system so you need to book a week ahead. Every week we sell out in 15 minutes. The whole week is booked up. It’s great.

What’s been a big failure in your business journey so far?

Opening up Eureka in 1989, a restaurant-brewery. I oversaw the restaurant side of things and my partners the other stuff. We were supposed to make a million cases of beer a year but we made beer the traditional way, it was not pasteurized and hundreds and hundreds of cases went bad. I only owned 10 percent of it but it was a lot of growth to get there and then to fail.

You’ve expanded out of the restaurant sector into other business ventures. What does revenue look like for you these days?

For the fine dining side of things, its $200 million. For catering, it’s $250 million and my licensing side is another $200 million. The main city for catering is still L.A., though markets like Washington D.C. and Atlanta are also there. We cater for big events like the Oscars all the time.

What’s your strategy when you think about global expansion?

For restaurants, we team up with hotel management. Yes, it’s limited growth but I don’t have a lot of capital so this works for me. We sign management deals with hotels, for example, we have three places in the Four Seasons in Bahrain. Would I have invested my money in Bahrain? Probably not. Would I have found investors here to invest there? Probably not. But the people who own the Four Season there, they needed a good restaurant.

Are there things you look at when you look at these types of management deals? Are there particular brands you want to work with?

We try to associate with brands where our restaurants have synergy. We try to be with people like the Dorchester Group, which got us the Bel Air Hotel. Four Seasons hotel is another brand that gels with us, we try to be with premium brands.