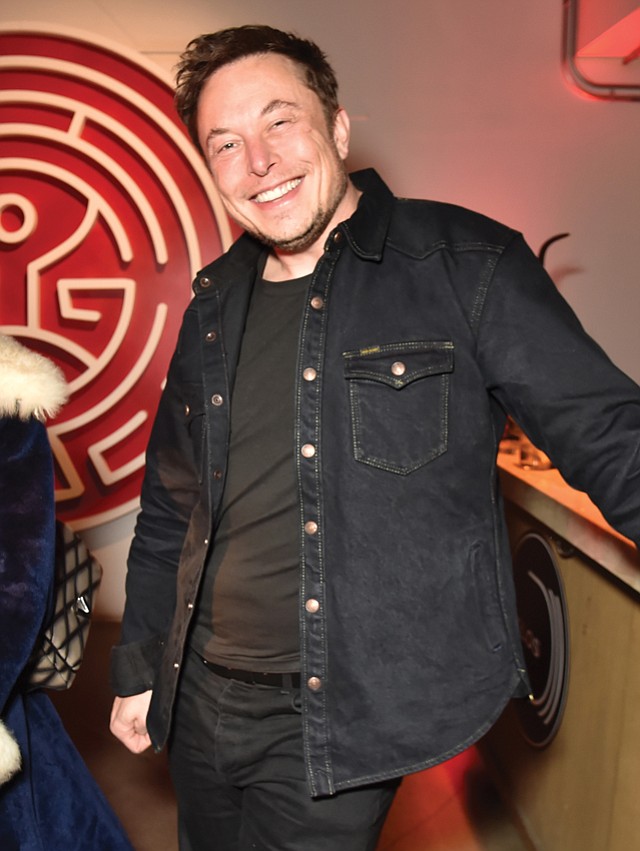 Out and About: Musk at the Los Angeles premiere of the second season of HBO’s “Westworld” in April.

“Today I’m pleased to officially announce that SpaceX will start production development of the Big Falcon Rocket in the Port of Los Angeles,” Garcetti proclaimed. “This is a vehicle that holds the promise of taking humanity deeper into the cosmos than ever before.”

“And this isn’t just about reaching into the heavens,” the mayor continued. “It’s about creating jobs right here on earth.”

His electric car company, Tesla Inc., has endured stalled production of its Model 3 sedan, a recall of Model S cars, and a May shareholder conference call in which Musk deemed investor questions “boneheaded” and “boring.”

Tesla runs a factory and offices in Fremont and Palo Alto. But Musk also faces new opportunity and controversy with his two companies closer to the billionaire’s Bel Air residence.

Conjuring a modern take on the cliché that all politics are local – even in matters of interplanetary commerce and human salvation – Musk has, for the first time, put himself into the thicket of Los Angeles government.

Just the last two months have seen him inspire (and, at times, alienate) civic stakeholders – groups that Musk never before had to interact with, much less seek approval from.

The business community, meanwhile, takes a wait-and-see approach to Musk’s new venture, the Boring Co., his underground transportation project which is also headquartered in Hawthorne.

“All of Mr. Musk’s enterprises have a large commercial element to them and great public interest,” John Forry, managing director at financial and accounting consultancy CBIZ Inc., said of Musk, who declined an interview for this story through a spokeswoman.

“But I don’t think his commercial experience and finance will necessarily make his technology more reliable. And that’s going to be the crucial element.”

Musk was born in South Africa, went to high school in Canada, completed college in Pennsylvania, and for more than a decade has lived in Bel Air.

He became wealthy, however, in Silicon Valley. Musk was one of its earliest moneymakers, selling Zip2, software that put newspaper content on the web, to Compaq in 1998 for $400 million. The next year, Musk was interviewed on television as he took delivery of a $1 million car, the McLaren F1.

These days, Musk, No. 2 on the Los Angeles Business Journal’s list of Wealthiest Angelenos, has an estimated net worth of $19.6 billion.

Musk toggled between Silicon Valley and Los Angeles for years, and managed to stay out of the public eye here even as he later accumulated five Bel Air mansions valued cumulatively at $170 million. 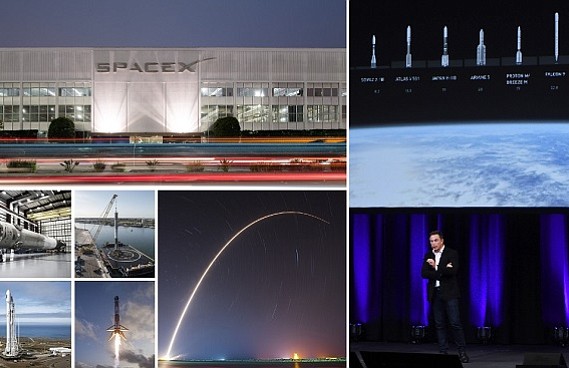 LIFT OFF: SpaceX is based in Hawthorne. The company’s Falcon 9 was the first commercial rocket to deliver cargo to the International Space Station. Last year, Musk spoke at the International Astronautical Congress in Adelaide, Australia, about the feasibility of a human colony on Mars.

Eyes on the Sky

Most of Musk’s publicly listed SpaceX investors are in Northern California, New York City and Chicago. Only one of over a dozen, Santa Monica’s Bracket Capital, is Southern California-based.

Musk does not partake in local political campaigns or fundraising, save a couple of thousand dollars each to Garcetti and Antonio Villaraigosa, when he was L.A.’s mayor.

SpaceX has publicized its employees’ volunteer efforts in science classrooms in Hawthorne and surrounding cities. It also has been a sponsor of the Los Angeles County Science and Engineering Fair and the Los Angeles FIRST Robotics Championship, and the company runs a student engineering competition.

But there is no record of Musk giving money or making appearances at Los Angeles County foundations, charities or nonprofit events. Musk’s most noted instance of philanthropy is donating $7.5 million to the Cambridge, Mass.-based Future Life Institute, money to combat the potential nefarious effects of artificial intelligence.

“He has not been engaged in a lot of civic and philanthropic activities,” said Gary Toebben, outgoing president of the Los Angeles Area Chamber of Commerce, contrasting Musk with Eli Broad and David Geffen, who have art museums and schools named after them, and Patrick Soon-Shiong, ranked No. 1 on the Business Journal’s Wealthiest lists and who’s in a deal to buy the Los Angeles Times and owns a cut of the Los Angeles Lakers.

Musk has been more like another wealthy Angeleno from an earlier era: Howard Hughes, a brilliant, if unusual, innovator, Toebben said.

“We are delighted that he is using Los Angeles as a laboratory for his business and design,” he said.

Musk has publicly considered moving some SpaceX production to the Port of Los Angeles for the past five years, a possibility raised by the diminishing room to expand in Hawthorne, and the idea that moving space rockets by sea is superior to land. The notion became a concrete plan when the Board of Harbor Commissioners approved in April a 200,000-square-foot-structure to build Big Falcon interplanetary rockets on San Pedro’s Terminal Island.

The manufacturing and shipping facility will be flanked by up to four 12,000-gallon tanks for storage of argon, helium, nitrogen and oxygen.

“The Port will play an increasingly important role in our mission to help make humanity multi-planetary,” SpaceX President Gwynne Shotwell said in a statement.

An approval from the harbor board commission sent the project along to City Hall, where it has the mayor’s blessing and that of Joe Buscaino, L.A. City Councilman whose district includes San Pedro.

“The council member is jumping up and down celebrating this,” said Busciano spokesman Branimar Kvartuc.

Kvartuc said the project will bring hundreds of jobs to San Pedro, and Musk’s cachet could make the neighborhood a hip hub.

There are some environmental concerns with the new SpaceX facility. The California Natural Resources Agency gave SpaceX’s project a “mitigated negative declaration,” meaning the company must show it will do nothing to harm surrounding air quality.

Musk, indeed, has staked much of his fortune on a non-polluting car. But there are questions about diesel emissions from SpaceX’s cargo and remediation of a site shuttered since 2005.

If SpaceX’s development shows Musk’s success in getting the city on board with his vision, the Boring Co.’s early interactions with City Hall test the limits of how Musk can leverage his famous name toward a company breakthrough.

The City Council Public Works and Gang Reduction committee unanimously approved in April a motion to make a prototype tunnel from the Boring Co. exempt from environmental review. The novel project was awaiting full City Council approval at press time.

The 2.7-mile tunnel would run under Sepulveda Boulevard, starting at Pico Boulevard in the north and concluding at Washington Boulevard on the south.

There, the company would test out its drilling techniques and Musk’s plan for zero- emissions, high-speed, underground transit. Conceivably, automobiles would be dropped from the street surface into the tunnel, traverse through the tunnel, and back onto the street.

As the committee moved to pass the legislation, Phil Washington, president of Los Angeles County Metropolitan Transportation Authority, sent a letter to Musk, noting they were not consulted about the project, and that they were doing their own environmental study process on the Sepulveda Transit Corridor project.

The two sides have since met, and a Boring Co. spokesman vowed, “We plan to partner with Metro to complement and enhance existing public transportation options in Los Angeles.”

Pauletta Tonilas, a spokeswoman for Metro, concurred with the Boring Co.’s version of events, stating the two sides are in dialogue. But it is a new challenge, Tonilas said, for a public infrastructure agency to work with a for-profit, private infrastructure outfit.

The Boring Co.’s cheeky name and genesis from a Musk tweet complaining about his Bel Air-to-Hawthorne commute triggered early speculation that the company was a lark. That notion was compounded when Musk gave a Ted Talk in April 2017 stating he allots 2 percent to 3 percent of his time on the Boring Co. and that he delegates most company tasks to just interns. 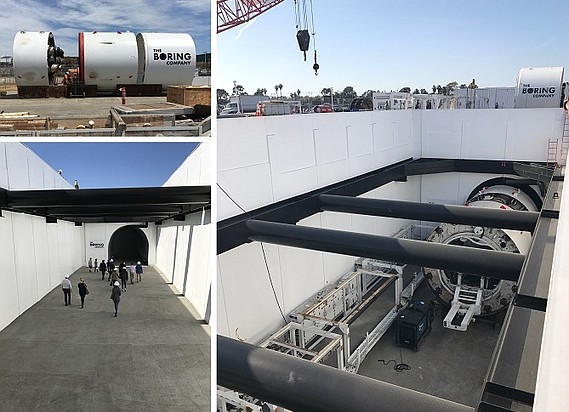 Digging Down: Boring Co. is testing advanced tunneling technology and practices in Hawthorne.

Musk appears to have ramped up his Boring Co. work over the past few months, however.

A company operations executive, Jehn Balajadia, met with Culver City officials in a divisive March meeting at which some council members were praising Musk as a genius, while others saw underground tunnels as a costly distraction.

Musk did not appear at the Culver City get together, said Damien Newton, former editor at Streetsblog LA, who was at the meeting and said the company didn’t seem interested in convincing the public about its plans.

“There were a group of people in suits from the back – maybe they were from Boring? – but no one got business cards from them or anything,” Newton said.

Musk has moved beyond his original self-deprecating statements about the Boring Co., Newton contended, but has yet to publicly sell a vision of the company.

Musk apparently hasn’t sold a vision to investors, either. No venture capital firms have invested in the Boring Co.

A Securities and Exchange Commission filing from April disclosed that $113 million was put down toward the company, but that money was quickly traced back to Musk himself.

Musk also tweeted in May that he planned to use excavated muck from the tunnel boring to build bricks for low-income housing, an announcement that was met with initial skepticism from Los Angeles urban planning experts.

Whether venture capitalists – or anyone other than Musk himself – warm up to the Boring Co. will likely depend on its technology being proved as effective, Forry of CBIZ said.

A shortcut, though, might be if a city – perhaps lured by the Musk cachet – publicly finances the outfit. Chicago is looking at using the Boring Co. to provide transit to O’Hare International Airport, Forry said.

Los Angeles is not giving Musk any money for the demonstration tunnel. But observers argue that an environmental review exemption is a major concession.

Usually infrastructure projects, particularly ones from a private company laying out a new concept, must go through an environmental review and public comment period, said Carter Rubin, of the Natural Resources Defense Council’s Santa Monica office.

The Boring Co.’s “categorical exemption,” Rubin said, forecloses investigation into the air pollution, contamination with ground water and digging up of historic resources that the tunnel would cut across.

Musk or Boring Co. representatives have not met with NRDC or other environmental groups, Rubin said.

Alison Simard, a spokeswoman for Councilman Paul Koretz, noted that the city’s Bureau of Engineers signed off on the environmental exemption, though the bureau is not an environmental agency.

Koretz’s district includes Musk’s five mansions. But neither Musk nor his representatives ever met before with the councilman’s office, Simard said.

Asked about concerns with the tunnel project, Simard said, “Elon Musk has a vision to save our planet.”