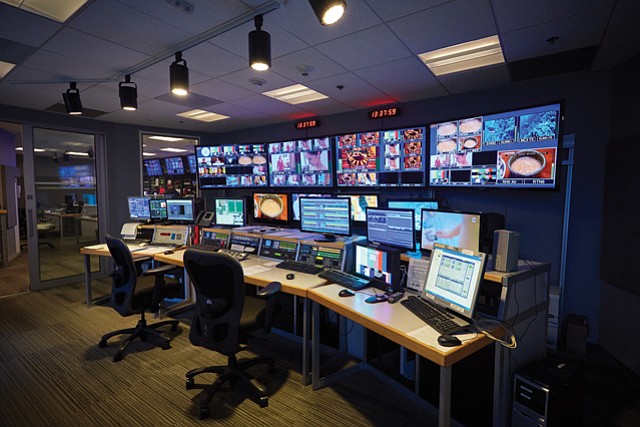 The plan calls for KCET’s current home in The Pointe office tower at 2900 W. Alameda Ave. to serve as one of two headquarters for the new company.

“The merged organization will use the two original hubs – one in Burbank and one in Costa Mesa,” said PBS SoCal Chief Executive Andrew Russell, who will head the yet-to-be-named company. “They will continue to be vital to the organization.”

The new name of the organization could represent an overarching brand, with both of the stations keeping their current call letters and common monikers.

Both KCET and PBS SoCal will, in any case, operate under the ultimate banner of the publicly subsidized broadcasting system. Both plan to keep all of their existing channels and outlets, which include seven broadcast channels, a satellite station and two websites between them. Russell said the broadcasters plan to pool their collective assets without making cuts to staff or programming. He framed the move as a merger of equals that offers different types of content. No payments were made to either side as part of the deal.

KCET broke away from the Public Broadcasting Service network in 2011, giving up its standing as the flagship public TV station for the Southern California region. It instead opted to try its fortune as an independent, nonprofit presence focused on original programming covering local news, arts and culture.

PBS SoCal, meanwhile, picked up the flagship status from the national network, and became the main source for award-winning PBS programs such as “Downtown Abbey” and Ken Burns’ documentaries.

The move to join forces aims to blend the two staples of content,

“The merger will bring complementary strengths for both sides,” Russell said. “This isn’t a merger where there is a lot of overlap.”

The Burbank facilities will remain KCET’s production center, where it now has about 70 employees and could eventually host 10 to 15 more from PBS SoCal. Russell expects the integration to take about 12 months as the stations map out their local production plans.

“There will be good opportunities for cost-effective operations,” said Russell. “We’ll find those pieces fit together pretty well.”

KCET trimmed its space in Burbank in October when it subleased close to half of the 55,000-square-foot facility to The Switch, a New York-based firm that provides video signal routing services. The company took over four control rooms, nine edit bays, a 2,500-square-foot soundstage and a 1,500-square-foot virtual green screen studio, according to The Switch. The Switch also handles the master control and broadcast origination for KCET and its satellite channel Link TV as part of the lease deal.

Russell said there are no plans to change KCET’s agreement with The Switch. It plans to continue to lease – and sublease – the Burbank location for at least the next five years.

“We have both locations until 2023 (when our lease is up) and then we’ll look at our long-term plans,” he said.

KCET moved to the 14-story office tower in Burbank in 2011 after selling its longtime headquarters on Sunset Boulevard in Los Angeles to the Church of Scientology. The move came after the station severed ties with PBS, a move that stemmed in part from a disagreement over membership dues.

Operating without PBS’ funding, its host of popular shows proved to be costly for KCET. Ratings, contributions and revenues reportedly took a major hit, and the downturn likely forced the organization to sell its Hollywood real estate.

The most recent available tax filings indicate that contributions to KCET dropped to $16.2 million in 2015 from $22.8 million in 2013, when the nonprofit operated at a loss of more than $7 million.

KCET said contributions and revenues have rebounded in recent years.

Analysts see the mergers as a way for legacy media companies to compete with digital platforms such as Netflix Inc., Amazon.com Inc., Google parent Alphabet Inc. and Facebook Inc., which are siphoning away viewers and eating up a larger share of total advertising revenue.

KCET Chairman Dick Cook acknowledged such challenges in the company’s announcement of the merger.

“In this dynamic time for media, this is exactly the right moment to marry the complementary core strengths of each of our organizations,” Cook said in a statement. “Our new company combines PBS SoCal’s beloved quality programming and community engagement excellence with KCETLink’s passion for creating smart, original content that captures the spirit of the region.”

Both stations have focused on expanding their digital presence by producing online videos and articles to share on social media. Russell said the new company will continue to make this a priority to enhance its arts, culture, news and public affairs coverage.

“We want to build it as a center for innovation to lead into the future media age,” he said.