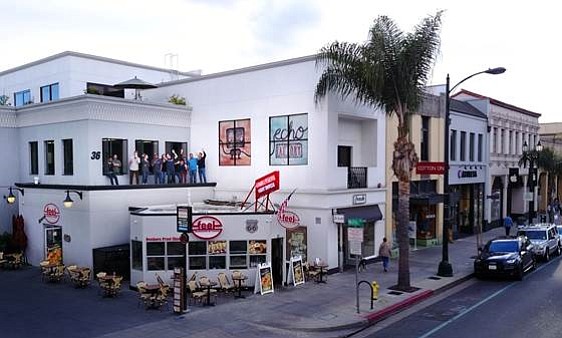 This spring, Pasadena-based advertising agency Echo-Factory is celebrating its 10th anniversary. Today, the 18-person agency has completed more than 8,000 projects for a roster of clients that includes Cedars-Sinai, GE, Honda, Audi, MagLite and others.

The agency first opened its doors in 2008 as the expansion of a commercial photography studio. Founder and CEO Mike Schaffer describes those beginnings as less than glamorous.

“Back then, we were renting a commercial garage in Upland. We’d cram three or four of us in an office the size of a broom closet.”

Despite its cramped headquarters, in the agency’s first year, Echo-Factory attracted clients in two niches where it still specializes today: cleantech advertising and aerospace advertising.

After two years of growth, the agency relocated to larger offices in Rancho Cucamonga in 2010. That same year, Echo-Factory took home a best in show award at the ADDY Awards, a performance that Echo-Factory repeated in 2011 before making the decision to focus exclusively on client work.

“Awards are great, and everyone loves to be able to show them off,” says Schaffer. “But at some point they can become a distraction, and we’ve always been committed to being a completely results-oriented agency.”

Those results are, by any measure, impressive. While most of the companies that Echo-Factory works with are private, the agency can lay claim to helping create over $250 million in growth for its clients, 13 of which have been acquired while working with the agency.

A significant part of that growth comes from the two other niches that Echo-Factory specializes in: health care advertising and consumer goods advertising. The company signed its first clients in both industries in 2009, and today works for major hospitals, medical groups and health systems, and several consumer goods manufacturers.

“Besides the growth of our clients, one of the key measures of success we look at is the longevity of our client relationships,” says Schaffer.

Even while going through its own growth and evolution, Echo-Factory has a roster of 10 clients who have been with the agency for five years or more – over half the agency’s life span.

Echo-Factory’s most recent move came in 2014, when it relocated to Colorado Boulevard in Old Town Pasadena.

Since moving, the agency has immersed itself in the life of its city. Schaffer is the co-host of the popular Friday Coffee Meetup, a weekly event for Pasadena’s tech and start-up community. Last year, Echo-Factory hosted a Women in Tech roundtable at the Pasadena and Santa Monica Apple stores, and started to work for the city’s convention and visitor bureau. And every January, the agency hosts a Rose Parade viewing party for clients, from its balcony that overlooks the parade route.

“It’s humbling to look back on the last decade,” says Schaffer. “We owe our success to clients who were willing to take a chance on a new agency; workers who gave us their creativity and brilliance; and advisors, friends and family who supported us along the way.”

What’s next for the 10-year-old agency?

“We’ve got two goals,” says Schaffer. “First, we want to help our clients create the growth they’re looking for. Second, I want everyone who works here to have their dream job, just like I’ve found mine.”