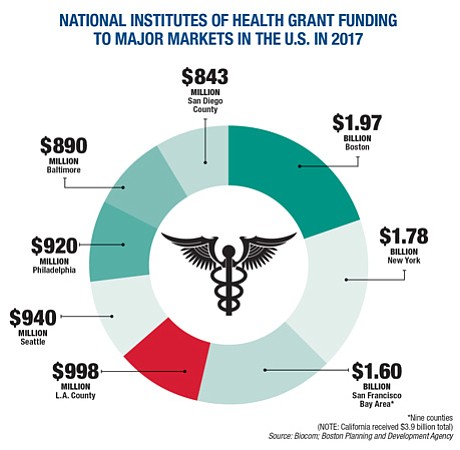 Bioscientists across Los Angeles County received $1 billion in federal research funding last year, a $100-plus million increase over 2016, according to a statewide report.

The National Institutes of Health doled out $998 million in funds for nearly 2,000 research grants to 74 bioscience recipients in L.A. County, according to Biocom, a California biosciences trade group based in San Diego. That L.A. County total was up from $893 million the prior year.

“This is a win for Los Angeles,” said Dina Lozofsky, executive director of Biocom’s Los Angeles office. “I’m very excited to see the growth in NIH funding, because I see it as an engine of growth in the bioscience industry in Los Angeles County and the value of research here.”

The NIH research funding puts L.A. County ahead of San Diego County, one of the nation’s top biotech hubs and recipient of $843 million in funding last year, but behind the nine-county San Francisco Bay Area, which got $1.6 billion. 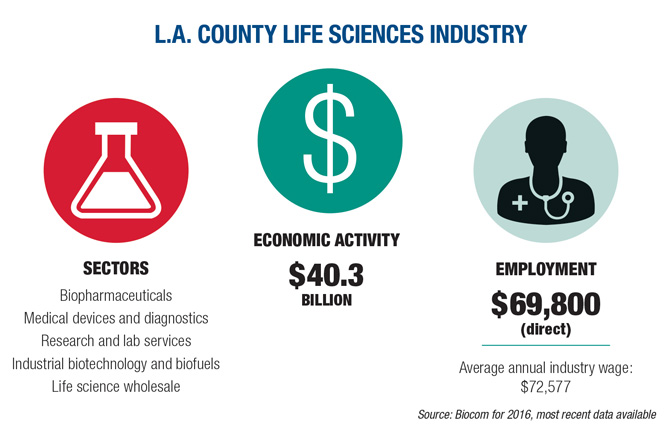 Boston, which received $1.97 billion, has secured more NIH funds than any American city for 23 straight years, according to the Boston Planning and Development Agency.

The NIH, made up of 27 institutes and centers, is the largest funding source for medical research in the world. It provides critical funding for basic research, and is an engine for both medical innovation and economic growth, according to Biocom.

“The NIH funding spurs innovation, which creates new technologies and startups, many of which start in Los Angeles,” Lozofsky said. “I would expect more funding to come to L.A., based on the increase in the NIH budget.”