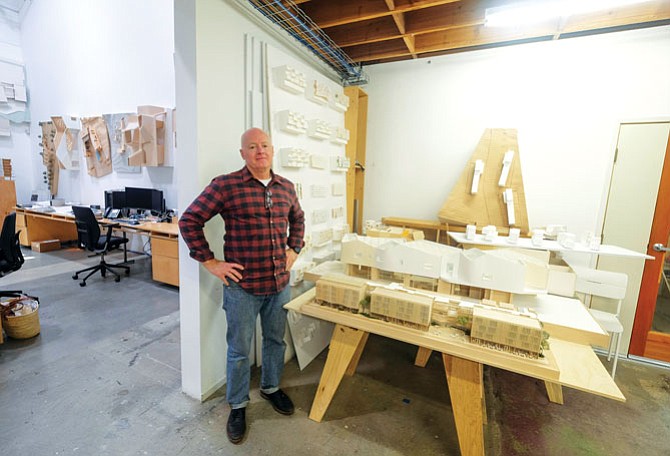 A prime example: Rios Clementi Hale Studios, which employs about 130 people. The firm moved from Larchmont Village to Leimert Park in 2016 after buying a one-story, 32,000-square-foot industrial property with 42 parking spaces on Exposition Place for $9.4 million, or $293 per square foot.

The studio’s projects include Row DTLA, Flight at Tustin in Orange County and the San Francisco Flower Mart. The firm landed in Leimert Park after checking the the Westside, where space is pricey, and encountering other challenges downtown.

The relocation of such a firm the size of Rios Clementi Hale is part of a trend underway for at least several years.

Neil M. Denari Architects Inc. leases the site of the former Dios International Missionary Church at 4335 W. Adams Blvd. coming from a former space in Culver City. In 2015, architect and USC professor Christof Jantzen paid $550,000 for a 3,300-square-foot property at 4870 W. Adams Blvd. for his Studio Jantzen, which moved from a Venice office.

That same year saw architect Lorcan O’Herlihy pay $1.2 million, or $279 per square foot, for 4106 W. Jefferson Blvd., a one-story, 4,300-square-foot Class C industrial warehouse near West Adams that was built in 1951. It houses his firm, Lorcan O’Herlihy Architects, which moved from the Mid-City area north of the 10 freeway.

He said he found block building with a bow truss ceiling particularly attractive to house his business.

“There are very few of them left in the Los Angeles area,” O’Herlihy said.

“It’s very central. It’s close to everything. It’s easy to get to,” said Kevin Daly, founder of Kevin Daly Architects.

His firm was based in Santa Monica for years, but Westside rents skyrocketed, forcing his hand. Daly said his firm’s old rent in Santa Monica was heading north of $3 per square foot while the space in West Adams goes for under $2.

Daly’s firm employs 18 people and shares space with Greg Lynn Form, operated by Greg Lynn, who also is a professor of architecture at UCLA and University of Applied Arts Vienna in Austria.

The location comes with 20 parking spaces and a yard – which gives them enough room to create mockups of their latest projects, Daly said.

“The rents (in Santa Monica) got to the range that architects couldn’t continue to support them,” Daly said.

The shift to the neighborhoods along the Expo Line was also pushed in part by younger employees who had moved to Silver Lake and Atwater Village as those neighborhoods became more fashionable. Commutes to Westside offices grew more difficult, though, and cast the Leimert Park, West Adams and Crenshaw districts as more practical alternatives.

The option for public transportation that came with the Expo Line helped foster the trend, and so did the mid-way locale that the districts south of the 10 freeway offered.

The completion of the Crenshaw/LAX Line, expected next year, will drive additional business and attention to the area, Daly predicted.

The relocation of architecture and design firms to South Los Angeles echoes the area’s past. West Adams is one of the city’s oldest neighborhoods and contains multiple historic buildings, including notable homes and mansions. Village Green, located in the Crenshaw district, is one of the nation’s oldest planned communities.

USC alumnus and pioneering African-American architect Paul Williams lived in nearby Lafayette Square. He designed thousands of buildings in Southern California, including the Beverly Hills Hotel’s Polo Lounge, the Golden State Mutual Life Insurance Building, the now-demolished Ambassador Hotel, and scores of homes in and around Los Angeles, including for the rich and famous. Williams also helped design the Space Age-era Theme Building at Los Angeles International Airport.

The trend among architects also reflects the process and pressures of gentrification coming to the area, which has historically been a patchwork of middle-class African-American neighborhoods.

Redfin, a Seattle-based provider of real estate data, named West Adams as one of the nation’s most competitive residential real estate markets in 2016.

“I’m convinced the Expo Line was crucial to this area becoming more vibrant,” O’Herlihy said. “People are bringing in creative offices and cafes. People have caught on the fact that this has become a very interesting area.”

In the meantime, the area continues to attract talent from other parts of the city and county.

Atelier Hitoshi Abe moved its Los Angeles office to the West Adams area about one year ago from Hollywood. It now resides at 4472 W. Adams Blvd. (It maintains another office in Japan.)

The high ceilings were attractive – as was the 30 percent discount on rent compared to his Hollywood rent near Sunset Boulevard and Orange Drive, said Hitoshi Abe, an award-winning architect and chair of UCLA’s architecture and urban design department. The central location also made it attractive to his firm’s four employees, he added.

“We needed some kind of creative office,” Abe said. “At the moment, I’m very happy.”