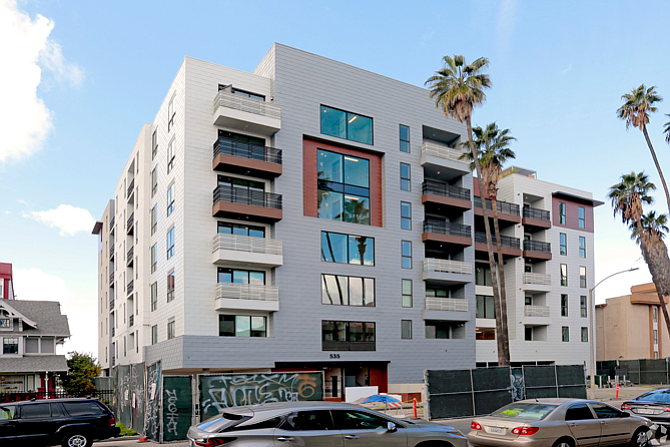 Koreatown-based Jamison Properties, a subsidiary of Jamison Services, has completed its first ground-up construction project as the first of four new apartment developments that it will open in the Los Angeles market this year.

Maya is a seven-story, 72-unit, market rate apartment building at 535 S. Kingsley Drive in Koreatown and offers one- and two-bedroom units ranging from 580 square feet to 1,265 square feet.

Additions of new apartments haven’t kept up with the demand in the densely-populated neighborhood, said Jamison Properties Chief Executive Garrett Lee in a statement.

“We see that continuing for the foreseeable future, especially as vibrant urban environments such as Koreatown and downtown Los Angeles become the place of choice for young professionals,” Lee said.

The units contain high-end stainless steel appliances, stone countertops, wood-style plank flooring, in-unit washers and dryers and private balconies, among other amenities. The building offers a fitness center, a central courtyard with a pool and clubhouse, underground parking and a rooftop terrace with views of Hollywood and downtown Los Angeles.

Jamison is a major landlord in that neighborhood, owning and developing multiple projects in the densely-populated area. Previously, it converted two former commercial office buildings into multifamily residents.

In 2013, the company opened Westmore, a 127-unit conversion of a former 12-story office building at 3075 Wilshire Blvd in Koreatown. Three years later, Jamison opened Abbey, an adaptive reuse of a 1927 office building into a 110-unit apartment complex at 3550 W. 6th St., also in Koreatown.

Later this year, Jamison will branch out from its Koreatown roots and open Circa, a 648-unit luxury apartment complex at 1200 S. Figueroa St. across from downtown’s LA Live. Circa is being developed in partnership with Hankey Investment Co. and Falcon California Investments.

The borrower plans on using the loan to improve the 15-story, 87,000-square-foot building, which includes a basement and three floors with outdoor terraces, iBorrow said in a statement. The plans include spending $2 million on upgrades and developing the office floors so each unit can be customized for tenants.

The owner is Koreatown resident Michael Chang, according to CoStar Group Inc. records.

“The borrower has successfully owned, developed and managed numerous downtown Los Angeles office buildings,” said iBorrow Chief Executive Brian Good in a statement. “This combination of factors made this loan a compelling one for iBorrow.”

The building, which opened in 1931 during the depths of the Great Depression, is home to the Exchange LA nightclub. It was designated a Los Angeles Historic-Cultural Monument in 1979. The Pacific Stock Exchange, formed in 1956 by a merger of the Los Angeles and San Francisco stock exchanges, moved out of the building in 1986 and ceased operations in Los Angeles in 2001.

PAX America, the building’s previous owner, bought the property in 2006 for a reported $7.6 million. It filed for bankruptcy protection in 2013.

West Hollywood-based developer Metros Capital has extended the deadline to March 19 for “ColorLA,” a public art contest for visual artists to display their works at several of its buildings.

Metros has given artists more time to prepare proposals, which will be judged by a panel of art community figures as well as Metros Capital principals, the developer said in a statement.

The winners will be announced later this month, and chosen works will be installed in Metros Capital’s residential buildings in common areas such as courtyards, underground parking spaces, hallways or large exterior walls.

The developer currently is renovating several residential buildings in Hollywood and West Hollywood.

Participating artists will have the opportunity to showcase their talents via paintings, murals, video displays, mosaics or sculptures, the company said.

Nick Halaris, Metros Capital co-founder, said in a statement that the company hopes to “bring creativity, expression and inspiration into places where these qualities have never really been found.”