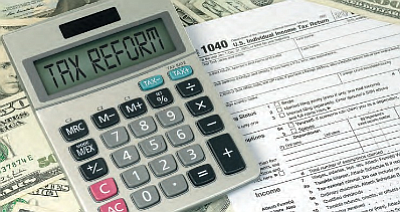 Here are some considerations in response to concerns about the new tax bill.

• Tax reform will increase after-tax incomes for businesses, allowing them to invest more in their workers.

• Cutting the corporate income tax rate isn’t a new idea - even President Obama proposed cutting the CIT tax rate to spur economic growth. But President Trump made it a reality.

• Currently, 94 percent of individual taxpayers & 85 percent of small business owners pay a professional tax preparer or online service to do their taxpayers for them.

• Reducing compliance costs through tax reform will save Americans $13 billion and 210 million hours of paperwork.

“THE TAX CUT AND JOBS ACT HELPS TOO FEW AMERICANS”

• Who actually takes the State and Local Tax deduction? Fewer people than you think.

• Why is tax reform focused on small business? Over 62% of Millennials have considered starting their own business; nearly 75% believe that startups & entrepreneurs are essential for innovation.

• More than one-third of the largest generation in the American workforce is both a worker and a business owner. Tax reform responds to the new reality of work in America.

• SALT is a tax break for wealthier Americans, with very few benefits flowing towards Americans with lower incomes.

• Tax reform means well over 90 percent of filers will no longer have to itemize their taxes, tremendously easing their tax compliance burden.

• Because of tax reform, 30 million people will not longer have to endure the frustration of itemizing.

• A modern economy needs a modern tax code: the Tax Cut and Jobs Act was the first major overhaul of the tax code in 30 years.

• Each taxpayers who is now able to take the standard deduction thanks to tax reform will save an average of 7 hours and $190 in costs.

Information fro this article was provided by the National Taxpayers Union (NTU), the Voice of America’s Taxpayers. NTU mobilizes elected officials and the general public on behalf of tax relief and reform, lower and less wasteful spending, individual liberty, and free enterprise.