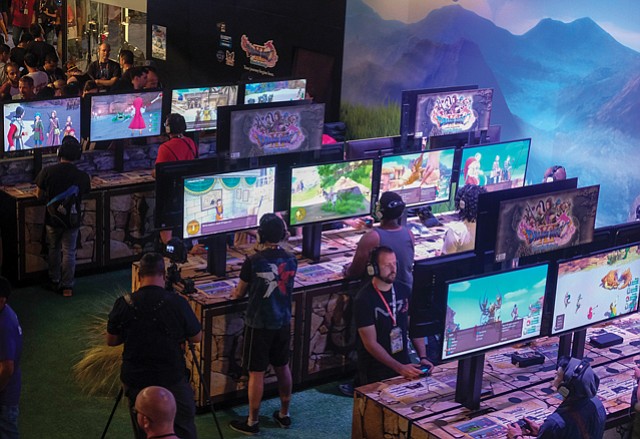 Demo Days: Fans can get early looks at games during E3 and often be some of the first to play. Photo by Ringo Chiu.

The convention, which took place June 12-14, featured 200 exhibitors from around the world, including indie game developers, multinational corporations and individual content creators.

“We want to build something like South by Southwest,” Rico said, referring to the annual music and tech gathering in Austin, Texas.

“L.A. doesn’t have that. It has E3 and the auto show, the only other things are centered around Hollywood, but after that we don’t have a two-week festival… like in New York or Miami. In Austin, Texas, South by Southwest induces $365 million total economic activity per year, and they’re a fraction of L.A. It’s important that things like E3 come to L.A.”

The Los Angeles Tourism and Convention Board said E3 2017 generated a record $75 million for the City of Los Angeles, up from $40 million in 2013. The three-day conference saw 68,000 visitors last year, up 41 percent from 2013’s 48,000 attendance. E3 2018’s economic impact isn’t yet calculated, but more than 69,000 people attended, according to industry group Electronic Software Association.

2017’s attendance figures were higher than expected due to 15,000 tickets sold to the public for the first time in event history, according to the tourism board. A total 28,000 overnight attendees generated 28,092 hotel room nights for Los Angeles during the show period and E3 2017 directly supported 27,891 total jobs, the board added.

“Year after year, E3 continually delivers significant economic lift to the local community as well as our hotels, restaurants and venues and we look forward to strengthening our valued partnership in the future,” Darren Green, senior vice president of Los Angeles Tourism and Convention Board, said in a statement.

While almost every major gaming company attends, there is somewhat of a divide in how these outfits roll out their featured games to the public. Many developers wait until E3 itself to launch products, shrouding them in secrecy until they finally hit the show floor. The idea is the anticipation provided by cryptic teasers, and the giddy excitement of the event itself, will boost game sales.

Other companies take a different tactic and offer a rollout before the show so they don’t get lost in the crescendo of gaming news that comes out of E3, according to Sven Liebold, lead developer for Burbank-based Warner Bros. Games, which released its latest game, “Hitman 2,” in conjunction with E3.

“It’s really basic thinking, because when you have E3 happening, there’s just an avalanche of news and trailers coming out at the same time,” he said. “And nowadays, (we) look for that little special spot before E3, so we have a chance to stand out a little more.”

The best strategy for unveiling a game might be difficult to measure, but the industry’s overall growth – and E3’s alongside it – is not.

The Electronic Software Association, E3’s sponsor organization, reported that in 2017, the video game industry generated more than $36 billion in revenue, up from $24.8 billion in 2012 and $9.5 billion in 2008. Revenue figures reflect digital content purchases as well as online subscriptions, mobile apps, social networking games and downloadable content.

The organization also reported there are now some 150 million Americans who play video games, and that last year, roughly 60 percent of Americans played games daily.

Santa Monica-based Activision Blizzard is one of the industry’s biggest growth drivers. The company had 2017 total revenue of more than $7 billion, and posted $2 billion for first-quarter 2018 net revenue, up from $1.7 billion in the same period last year. The company said earlier this year that it had 374 million active users worldwide, with an estimated 51 million who play Activision’s signature “Call of Duty” games.

Square Enix, the El Segundo-based subsidiary of Tokyo-based Square Enix Holdings Co. Ltd., is another industry giant. The company is behind seminal titles such as “Final Fantasy,” “Space Invaders,” and “Dragon Quest.” “Final Fantasy” is the company’s best-selling game, at a reported 135 million units worldwide, and over 10 million registered accounts. To date, “Tomb Raider” (arguably a more recognizable brand, but a less popular game) has sold roughly 63 million units.

Both Activision and Square Enix were prominent exhibitors at E3 last week, with both promoting several recently released games.

Activision had a gargantuan “Call of Duty: Black Ops 4” banner draped across the exterior dome of the convention center’s South Hall. Inside, the “Black Ops” booth and demo play area dominated most of the first half of the show floor, and no less than 10 banners hung around the entire convention hall, advertising the game’s release.

Square Enix loomed over the South Hall as well, with a gigantic faux-stone pavilion dedicated to the company’s new “Shadow of the Tomb Raider” game.

Extravagant displays at E3 are nothing new, but the rise of streaming platforms, such as Amazon.com Inc. subsidiary Twitch Interactive Inc., are becoming more prominent.

Dan Bunting, studio head of Treyarch Corp., the Activision subsidiary that is one of the game developers responsible for the “Call of Duty” franchise including “Black Ops 4,” said streaming is changing the way developers look at gaming.

“Content creators are important because they have a platform and a voice that speaks to a generation that’s younger, that’s growing up playing games, and engage with content in a different way than we have historically been used to,” Bunting said. “You have to pay attention to that, you have to think about, are you making a game that is fun to be watched as a spectator experience.”

While content creators and the use of Twitch have helped boost some games’ visibility, Warner Bros. Games’ Liebold said he prefers to focus primarily on the game’s functionality and user experience.

“Personally, as a developer, I wouldn’t like to go down the road of developing a game for a specific crowd,” Liebold said. “Especially because Hitman is all about freedom of approach.”

As the gaming industry grows – and E3 along with it – expect more diversity in perspective, something LAEDC’s Rico said mixes well with L.A. business culture.

“E3 is very emblematic of the fact that LA is a place on the planet where a lot of convergence is happening,” he said. “There’s so many things happening, so it makes sense that people are converging here.”