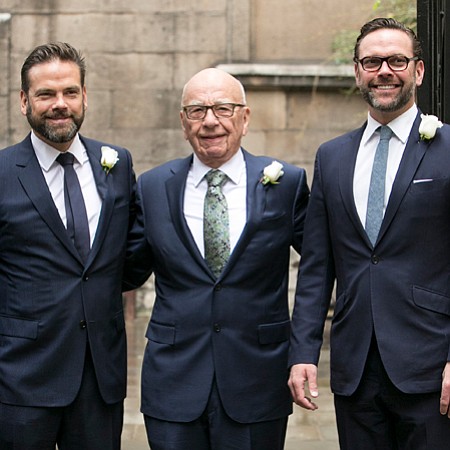 James and Lachlan Murdock, with their father Rupert Murdoch (center)

James and Lachlan Murdoch are the heirs to News Corp., the media company built by their father, Rupert Murdoch. James Murdoch serves as co-chairman of News Corp. and chief executive of 21st Century Fox, while Lachlan Murdoch, who has a house in Los Angeles, is executive chairman of 21st Century Fox. The company recently struck a deal with Burbank-based Walt Disney Co. to sell its film and television assets, plus cable stations National Geographic, FX and Star TV, and stakes in Sky, Endemol Shine Group, Hulu and regional sports networks for $71.3 billion. News Corp. will keep its Fox News and Fox Sports divisions. The deal, initially struck in December, prompted a bidding war with Comcast Corp. The two media giants are now battling over Fox’s share of European cable network Sky. Reports say Lachlan Murdoch will take over for his father as chairman and chief executive of News Corp.’s remaining holdings, while James Murdoch will move on from the company to pursue technology investments. Rupert Murdoch will remain on as co-chairman of the company.