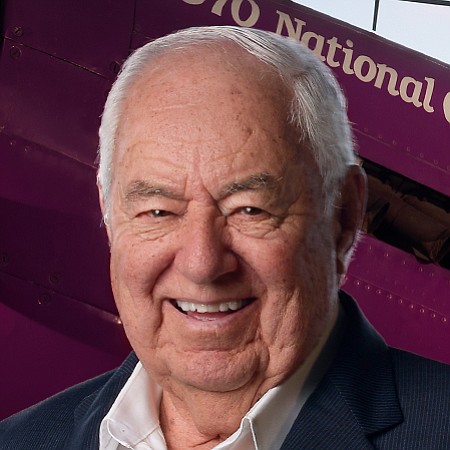 Clay Lacy is an entrepreneur and an aviation record setter whose 60-year career includes stints as an airline captain, experimental test pilot, air race champion and aerial cinematographer. He founded Clay Lacy Aviation in 1968 as the first executive jet charter service in the Western United States, and has built it to be one of the most experienced operators of private jets in the world. Lacy began flying at age 12. He started with United Airlines in 1952 as co-pilot, and a year later joined the California Air National Guard, where he flew the F-86 fighter jet. He has flown more than 300 aircraft types and logged more than 50,000 flight hours, more hours flying jets than anyone else in the world. Lacy holds 29 world speed records, including an around-the-world record of 36 hours, 54 minutes and 15 seconds, clinched in 1988. He helped develop the Astrovision camera system and has shot more than 2,000 aerial film projects for the entertainment industry, military and commercial airlines, including “Armageddon” and “Top Gun.” Lacy in 2010 was inducted into the National Aviation Hall of Fame and received commendations from the FAA for his aviation expertise and safety record.

My proudest moment was flying around the world in 1988 in a United Airlines Boeing 747SP to set a new speed record and benefit children's charities.

Los Angeles is a very live city with lots of opportunities.