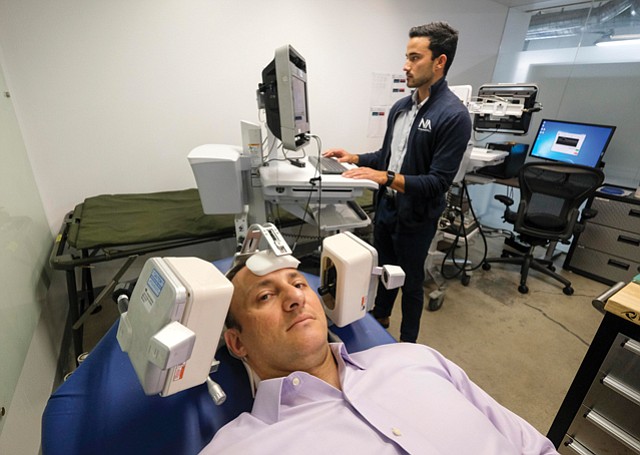 Ready for Close Up: Leo Petrossian, tries on NeuralBot, part of the Lucid Robotics System recently approved for market in U.S. and Europe.

A couple of MBA students mocked Ph.D. candidate Robert Hamilton when he pitched a plan to develop a portable medical device to diagnose traumatic brain injuries.

Then one of the hecklers, Leo Petrossian, went home and asked his wife, a physician, if she would use something like the device Hamilton pitched as part of an inter-disciplinary exercise at UCLA’s Anderson School of Management.

“Every neurologist in the country would use it,” his wife, Melita, a practicing neurologist, told him.

That was six years ago, and Neural Analytics Inc. – the biomedical company formed in 2013 by Hamilton, Petrossian and Dan Hanchey, the other one-time heckler – is now poised to take the robotics- and artificial intelligence-assisted ultrasound device to market.

The West Los Angeles-based company received U.S. and European clearance in May for its Lucid Robotics System, which assesses patients for strokes and other brain disorders.

The firm has nearly 100 employees and has raised $46 million in funding, including a $15 million Series B round in January led by Alpha Edison, a tech-focused venture capital company based in West Hollywood. Neural Analytics also has landed $6 million in research grants, and got a $10 million contract from the U.S. Department of Defense last fall.

The company is in the process of raising a Series C round of between $30 million and $50 million to assist with international expansion, according to executives, who said they expect to have the financing in place this fall.

The company has not yet released the price point for its Lucid Robotics System, and accompanying NeuralBot headset, Hamilton said. The system will compete against traditional ultrasound systems that cost $50,000 or more and require the presence of a skilled technician.

“We’re taking novel areas of machine learning and robotics, and combining them together,” Hamilton, its chief science officer, said. “To be honest, we’re not trying to replace people. We’re trying to provide valuable information to health care professionals as fast as possible. NeuralBot can give us the ability to take this into places such as the battlefield, ambulances, the football field, people’s houses. Anywhere.”

Brain disorders cost the U.S. nearly $800 billion a year, of which more than half is spent to treat strokes, concussions, migraines and dementia, according to a study published in March of 2017 in the Annals of Neurology. Americans suffer nearly 800,000 strokes a year, with timely intervention a major factor in survival rates.

Neural Analytics claims the Lucid Robotics System – which received federal clearance to evaluate brain blood flow characteristics and provide clinicians with information to diagnose neurological disorders such as stroke – has the potential to simplify the diagnostic process, lower health care costs by eliminating the need for skilled technicians, and increase patients’ chances for survival.

The Neural Analytics system combines an ultrasound system known as a transcranial Doppler with a boxy headset containing robotic wands that automatically monitor blood flow to the brain.

The device also uses artificial intelligence in the form of a machine learning software platform with algorithms to pinpoint brain disorders, company executives said, which helps it quickly tell doctors the extent of a stroke.

It also holds potential for use in diagnosing concussions, migraines, brain bleeding and dementia, although those applications are pending approval.

The Lucid Robotics System will be sold to hospitals and clinics in the third quarter of 2018. A hand-held version is being developed for the Department of Defense for use in combat scenarios. Other portable versions are being developed for ambulances and emergency responders.

“What I’m holding in my hand is the next generation of ultrasound,” Petrossian, chief executive for Neural Analytics, said, cradling a 10-pound Lucid NeuralBot headset devoid of traditional ultrasound wires. “We’ll no longer have to hold the ultrasound wands – we’ll have a robot. The benefit: it is available 24/7, never gets worn, never gets tired.”

While Hamilton’s initial pitch to UCLA business students was mocked, the noninvasive machine that could diagnose concussions anywhere from the football field to the battlefield soon won support from Petrossian, an entrepreneur with a doctorate in biomolecular nanotechnology, and Hanchey, with nearly two decades of software development experience who now serves as the company’s vice president of software engineering.

It also caught the eye of someone else on the UCLA campus.

Roy Doumani, executive director of the UCLA Business Science Center and a co-founder of the California NanoSystems Institute, immediately saw market potential in the device.

Doumani not only believed in the new company. He invested in it.

“The technology is good, it works,” said Doumani, former board chairman for Neural Analytics. “I believe it’s promising, because there’s a strong market for it.”

Hamilton said Neural Analytics has few competitors. While some surgical systems, such as those developed by Intuitive Surgical Inc. in Sunnyvale, employ robotics, and some imaging companies, such as Viz.ai Inc. of San Francisco, employ artificial intelligence, he said no biomedical company now employs both.

“To the best of our knowledge, there is nothing as good,” Doumani said. “Or as accurate. We’ve had it out to a few stroke centers, where it scored in the high 90s. The doctor’s love it.”