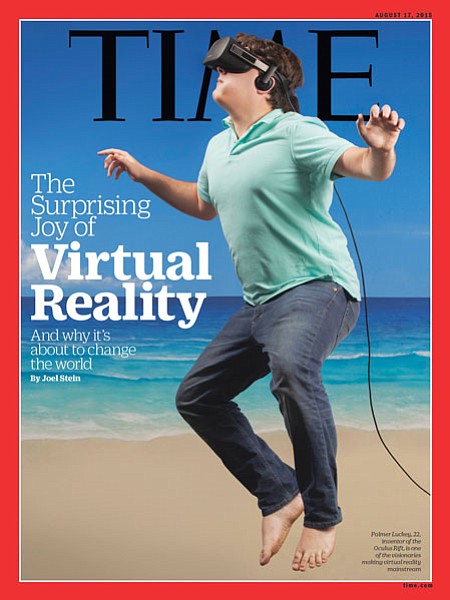 Luckey: Made cover of Time with Oculus in 2015, now has Anduril Industries focused on defense sector.

One of newly minted Los Angeles resident Peter Thiel’s investment vehicles is backing another recent émigré from the upper ranks of Silicon Valley on a defense technology startup.

Thiel’s Founders Fund venture capital firm led a recent $41 million round for Anduril Industries. The startup was launched a year ago by Palmer Luckey, who founded virtual reality headset maker Oculus VR, sold it to Facebook Inc. for $2 billion in 2014, and parted ways with the new owner last year after raising hackles with his political views.

The valuation of Anduril Industries remains unknown, with no information on how much of the company Luckey sold in the recent $41 million round or a prior $17.5 million seed round by Founders Fund, which remains based in San Francisco.

Founders Fund Partner Brian Singerman has directed the investment in Anduril Industries, according to a source close to the matter. Trae Stephens, another partner in Founders Fund, is one of four cofounders alongside Luckey in the startup, the same source said.

A few engineers coming from Thiel’s Palo Alto-based software firm Palantir Technologies are among the top executives at the Anduril Industries, whose operations and plans have only recently begun to attract some national attention.

Thiel is a billionaire investor with numerous Silicon Valley hits to his credit – he was a co-founder of PayPal Holdings Inc., the first outside investor in Facebook, and took early stakes in LinkedIn Corp. and Yelp Inc.

He recently moved his residence along with Thiel Capital and Thiel Foundaton to Los Angeles, a change he attributed to a general lack of tolerance for conservative political views in Silicon Valley’s tech sector, which he has called a “one-party state.” He ranks No. 29 on the Business Journal’s annual list of Wealthiest Angelenos with a net worth estimated at $2.5 billion.

Luckey started Oculus in his family’s garage in Long Beach, and eventually took on partners and investors from a base in Orange County, with a headquarters in Irvine at the time of the company’s sale.

Luckey also has reportedly found himself at odds with Silicon Valley’s tech community over his conservative political views. His departure from Facebook came in March 2017, following public disclosure that he had funded a pro Trump group called Nimble American. He apologized for any negative effects his actions brought to the Oculus operation, but he still headed for Facebook shortly before he parted ways with the company.

Thiel remains on the board of Facebook, but has said he’s considered stepping down from the post in the face of tensions with a fellow director over politics.

Both Thiel and Luckey have expressed support of President Donald Trump in the past.

Neither could be reached for comment for this story.

Anduril Industries’ business plan, meanwhile, appears to intertwine with politics, with an aim of combining virtual reality with surveillance tools for border security. The company “is pitching its technology to the Department of Homeland Security as a complement to – or substitute for – much of President Trump’s promised physical wall along the border with Mexico,” the recent Wired report said.

The goal is to “become a major tech startup that builds hardware and software specifically for the defense industry,” the June 11 report said.

“Our mission is to build the best tech to defend America and her allies,” Luckey said in a tweet last month upon Anduril’s one-year anniversary. “More to come soon!”

Luckey appears set to grow the company from a base in Orange County. It recently committed to lease one of the largest creative office buildings in the John Wayne Airport-area market in Irvine. The company will set up shop at 2722 Michelson Drive, a 155,000-square-foot building a few blocks from the airport, according to recent tweets from Luckey and the company.

The building is under construction and scheduled to be available for occupancy this year. It’s owned by Irvine-based LBA Realty.

Anduril Industries will lease the entire property, according to a second-quarter office report by brokerage Savills Studley.

It’s the largest office lease reported in Orange County so far this year.

Luckey has a home in Newport Beach and owns a marina in Huntington Beach.