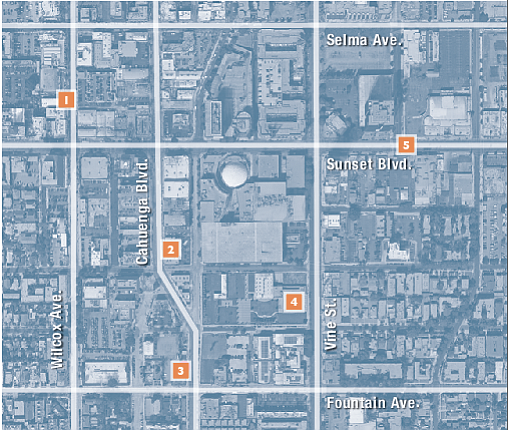 The latest phase of Hollywood’s resurgence is linked to an influx of new content creators and an accompanying boom in hotel and office construction.

More than half a dozen hotels are being built in the area. The convergence of technology and entertainment led to a sharp decline in vacancy last quarter to 9.3 percent, according to data provided by Jones Lang LaSalle Inc. That continued a trend that persists amid a surge in office construction.

Access to nightlife, the 101 freeway and the Los Angeles County Metropolitan Transportation Authority’s Red Line are some of the reason businesses say they’ve chosen Hollywood as a location that can help attract younger workers to them.

The cranes have not come without controversy. Developer Crescent Heights Inc. recently won L.A. County Superior Court approval for Palladium Residences, a dual high rise to be built adjacent to the Hollywood Palladium. AIDS Healthcare Foundation, which so far has unsuccessfully tried to block the development, has vowed to appeal.

The developments profiled here showcase Hollywood’s renaissance as a destination for people to work, play and live. The Godfrey and Thompson hotels, once opened, will provide more than 400 rooms for visitors. Kilroy Realty Corp.’s Academy on Vine is being developed as a place where the entertainment industry workforce can work, live, eat and shop. Those projects represent portions of a total 813,000 square feet of office space under construction during the second quarter, according to data provided by Jones Lang LaSalle Inc. Net absorption was positive at more than 4,000 square feet during the April-to-June period, despite the new real estate.