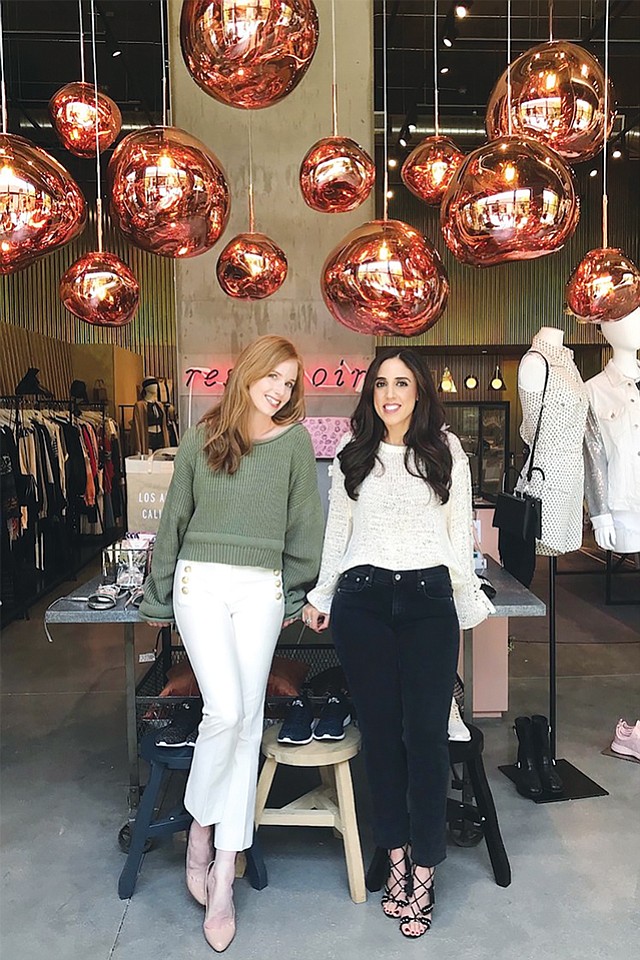 Curio Co-founders: Outram, Khouri at Reservoir, a boutique in Culver City that’s signed up with the app.

Consumers concerned about their digital data being mined by internet companies and sold to ad agencies might find peace of mind in recent moves by California’s state government.

Both chambers of the state legislature voted unanimously June 28 to pass AB 375, better known as the California Consumer Privacy Act of 2018, with Gov. Jerry Brown signing the bill into law later the same day. The bill gives consumers the right to know what personal data a company is storing, and to opt out or have information on them deleted.

The consumer protections have raised some concerns for the law’s potential effects on businesses.

“The bill authors [must] understand that California and the nation’s sharing economy has been built on the collection and sharing of personal information, frequently with express consumer permission,” Tom McMorrow, a partner at the Mannatt Phelps and Phillips law firm’s Sacramento office, said.

The legislation has equal potential to hurt businesses as it does protect consumers, according to McMorrow.

“Where do we strike the balance between personal privacy protection and access to everyday services that are now helping drive (California’s economy)?”

The bill calls for companies to be fined as much as $7,500 per violation of the new law, which takes effect in 2020, and could see efforts to amend its requirements between now and then.

“At SRAX, we recognize the value of personal data and have been working on privacy issues related to it for a year through our platform built on blockchain, which will provide consumers transparency, choice and compensation to manage their data, whether opting-out of sharing or opting-in to share it for payment,” Miglino said. “We believe that choice belongs entirely to the consumer.”

The law takes effect in January 2020.

What do an Angeleno, an Australian, and Postmates all have in common? A new iOS app, launched this May in Los Angeles, along with a desire for high fashion.

Khouri is an L.A. native who joined with Australian Christine Outram to start Curio Ventures Corp. in a bid to modernize boutique shopping in Los Angeles

Khouri’s last-minute shopping left her frustrated with the proliferation of local malls.

“The experience of the mall, it being crowded and everything generic, and I ended up leaving the mall with a dress just because I needed one, not because I liked it,” Khouri said.

That led her to programmer Outram to help develop an app that allows users to shop inventories of local boutiques in the city of Los Angeles, order the items, and pick them up in store.

App users in a rush have access to Postmates Inc.’s delivery service, which Khouri and Outram say comes with a guarantee that Curio users can have the item delivered in under two hours, regardless of the boutique’s distance from the shopper as long as the store is within the city limits.

The founders declined to discuss financials. They said they have now have five staffers and deals with 13 boutiques locally, each of which pays sales commissions to the company.

“The way we think of it is we’re the only company to combine speed and style,” Outram said. “You can order from Amazon Now, but you’re not going to get high style and gifts … we fit that busy consumer who’s interested in being stylish and having high quality clothing or gifts, and they’re not available to think about it.”

Curio will be available on phones running Alphabet Inc.’s Android operating system and move into other cities in the future if its L.A. trial is successful, the founders said.

West Hollywood-headquartered dating app developer Tinder Inc. said last month it had begun to encrypt all photos and data stored on the platform following a report from Checkmarx Inc., a private security firm, revealing that most of Tinder’s data was unsecured. Tinder also made changes to protect its swipe and match data, which was previously vulnerable as well.

Match Group Inc., Tinder’s parent company, reported in a letter to Oregon Senator Ron Wyden, who alerted Match Group about the issue, that not only are all transmitted images on the app encrypted now, but swipe data is also. Wyden brought up the issue after Checkmarx’s report showed Tinder’s image department lacked even the most basic HTTPS encryption, including safeguarding swipes and matches.