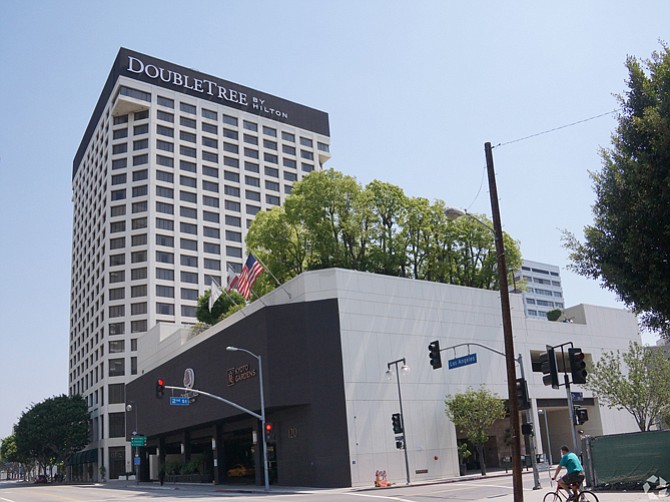 L.A.’s commercial real estate market draws plaudits from investors around the globe, but that won’t help with buyers from China, who have cut their pace of deals to the lowest level in five years.

It’s a dip by design, prompted by policies of China’s central government, real estate experts say. And it runs counter to a recent survey that puts Los Angeles at the top of the U.S. market from the perspective of foreign investors in commercial real estate (see related story, left).

About 18 percent of the commercial real estate in L.A. County was foreign-owned in 2017, up three percentage points from the year before.

China remained a big player, accounting for 21.7 percent of all commercial real estate sales to offshore buyers in the five-year period of 2013 to 2017, according to CBRE.

But it was a distant second to Canada, which accounted for $3.5 billion in commercial real estate buys here over the same period to secure a nearly 28 percent share of the total of sales to foreign buyers.

Qatar was a close third with $2.67 billion in transactions and a 21.3 percent market share.

China’s dip tracks back to late 2016, when Beijing began to impose limits on companies attempting to send money out of the country to purchase foreign assets, and also subject them to greater scrutiny.

Eye-catching developments being built with Chinese dollars dot the landscape.

Downtown’s $1 billion luxury condo-and-hotel complex Metropolis is still under construction by Greenland USA, the U.S. subsidiary of Shanghai-based Greenland Holdings. Beijing-based Oceanwide Holdings is at work on a $1 billion mixed-use project on Figueroa Street across from Staples Center.

But the more recent decline in deals has been unmistakable. Greenland USA pulled out of a 1.9 million square foot mixed-used project near the North Hollywood Metro Red Line station in November. Trammell Crow Co. of Dallas, a subsidiary of CBRE, was to be its partner in the project.

And it’s not only commercial real estate where Chinese investment has cooled.

Paramount Pictures announced in November that its expected $1 billion film financing deal with China-based Huahua Media had been scuttled. In a statement, Paramount cited “recent changes to Chinese foreign investment policies” as the reason behind the deal’s failure. And the anticipated $1 billion sale of Santa Monica-based Dick Clark Productions by Eldridge Industries to Wanda Group was called off in March 2017, reportedly over a sales price dispute. The matter ended up in a Delaware court.

The busted deals appear to reflect the priorities of China’s central government. The country’s State Council approved regulations last year that targeted what it described as “irrational” overseas investments in real estate, sports and entertainment.

The push by investors in China to find prospects in the U.S. stemmed from doubts about China’s economic growth prospects. The annual growth rate China’s gross domestic product slipped to less than 7 percent in 2016 from 9.5 percent in 2011. That growth rate is enviable by Western standards, but China is generally deemed in need of a growth rate of at least 7 percent to keep pace with the needs of its developing economy and population.

Concerns about maintaining the high growth rates, along with a view toward the relative stability and security of hard assets such as real estate in the U.S., helped push investment here to new overall highs over the past decade. The dollar volume rose in Los Angeles County from $800 million in 2011 to a peak of $4.8 billion by 2015, according to CBRE.

A weakening currency led Beijing to take its recent action to clamp down on outflow, including imposing capital controls. Those actions have helped the Chinese yuan along to a recent two-year high against the U.S. dollar.

The cutback on dollars going toward L.A. real estate has “some brokers hitting the panic button,” according to Entis, who added that he felt the fears were overblown.

“It’s a mature cycle,” Entis said. “We’re in the late stages of the cycle. Chinese investors are typically fond of larger, big-ticket opportunities…and there are fewer opportunities.”

Some significant local deals did come by way of China last year despite the restrictions.

Elite International Investment Fund bought a portfolio of 22 buildings, including The Alhambra complex for $156 million. The four-story, 131-unit, Luxe Apartments in Pasadena sold for $57.2 million to a private Chinese investor.

Some Chinese investors are looking beyond gateway cities on the coasts and are seeking to diversify their investments into health care and student housing, according to Alan Chu, a Los Angeles-based partner and China business network leader at PwC, noting that Los Angeles still remains an attractive market.

“We are definitely seeing some of the Chinese companies being deliberate in what they are doing,” Chu said.

The effects on L.A.’s commercial real estate market remain to be seen.

“There could be deflation of asset prices in L.A.,” said Mark Tarczynski, executive vice president at Colliers International. “But I’m not so sure.”