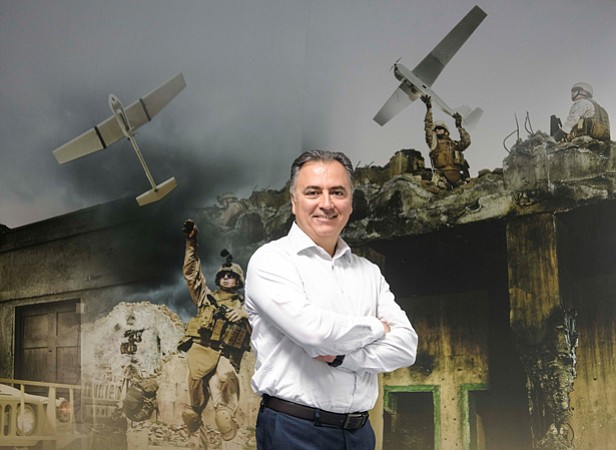 AeroViroment Inc. opened 2018 with plans to build a drone that flies higher and longer than any it has built before – a solar-powered plane that could soar in the upper atmosphere for weeks or months at a time and carry a load of telecommunications transmitters.

The company laid out its latest goals as part of a Jan. 3 announcement of a joint venture with Tokyo-based telecommunications giant SoftBank Corp., called HAPSMobile Inc. The new partners will join an ambitious field of projects – including a flying-wing in the works at Facebook Inc. and a balloon-based experiment by Alphabet Inc. – that aim to lift telecommunications transmitters up to 65,000 feet above sea level in order to grab a piece of the broadband market in developing countries.

AeroVironment also has secondary plans in the works at its Monrovia headquarters and manufacturing plant in Simi Valley. The company aims to use the same drones to serve as communications hubs for the U.S. military as its forces rely more and more on high-tech weaponry, gear and communications.

“Militaries have been deploying more and more data-intensive technologies on the battlefield,” said Steve Gitlin, AeroVironment vice president of corporate strategy. “There’s the potential for platforms like this to help with that.”

The Department of Defense is AeroVironment’s top customer and accounted for 40 percent of the firm’s revenue in fiscal year 2016, according to a filing with the Securities and Exchange Commission.

The majority of AeroVironment’s small surveillance drones are designed with the military in mind. The roster already includes several long-endurance, high-altitude drones built over the past three decades as research and development projects, including a solar-powered flying wing called the Helios Prototype, built in coordination with NASA. The flying wing flew to a world record altitude of 96,863 feet in 2001.

AeroVironment’s new telecommunications drone would improve upon the firm’s prior drones, said Gitlin, who declined to give a more detailed description of the aircraft.

The drone also would cost much more than the company’s average product, he said, declining to state the aircraft’s exact price.

It reportedly cost more than $1 million to develop the Helios Prototype in 2001 – several times more than AeroVironment’s small drones, such as the hand-launched Raven, which costs between $100,000 and $200,000 a unit.

“From a unit-value perspective, it’s very different from our current business,” said Gitlin. “We believe deploying this technology has the capability to be transformational for our company.”

The joint venture, HAPSMobile Inc. – HAPs stands for high-altitude pseudo-satellites – is a Japan-based corporation that is 95 percent funded and owned by SoftBank Corp. and 5 percent funded and owned by AeroVironment. AeroVironment is committed to contribute $5 million in capital for its 5 percent, and has an option to increase its ownership stake up to 19 percent. The joint venture will fund the development of the AeroVironment-built drone up to a net maximum value of $65 million.

The exact design specifications of AeroVironment’s drone have not been disclosed, but long endurance aircraft typically are carried upward by solar-powered propellers and the ability to soar on thermal columns of air. They are considered potentially cheaper than satellites in providing broadband connectivity to remote regions, developing countries, disaster areas, and – according to AeroVironment – the battlefield.

The Department of Defense is looking for additional data communication capacities on the battlefront because soldiers increasingly use networked devices and programs, such as global positioning systems, drones and battlefield management software.

“You’ve gone from an environment where people traditionally use radios for voice communications to all these sensors in the battle field,” said Ric Agardy, principal engineer in the military satellite communications division of Aerospace Corp. in El Segundo.

“That’s something that didn’t exist years ago, but now generates hundreds of thousands of megabits of data,” he said.

Such technologies currently rely on line-of-site or satellite communications equipment to stay connected to the military’s warfare network, but the Department of Defense is looking for alternatives and backups, said industry analysts.

“Increasingly there is concern that more capable adversaries like China or Russia will have the ability to deny access to those satellites,” said Dan Gonzales, senior physical scientist with Rand Corp. in Washington, D.C. “They can actually shoot down these satellites as well as electronically jam them.”

Long-endurance drones that fly at high altitudes and miles away from enemy fighters and anti-aircraft weapons could be an alternative in some situations, said industry analysts. Such unmanned aerial vehicles could also be potentially cheaper to build and fly than satellites, which cost millions of dollars to manufacturer and launch into orbit, and can’t be upgraded once they are in outer space, said Wahid Nawabi, AeroVironment’s chief executive officer.

“As soon as you launch it, the communication gear you designed into the satellite, it is already out of date … you can’t upgrade once you’re up there,” he said. “Solar HAPS, you can bring it down anytime you want.”

“The cost curve on solar cells and batteries to enable the economics of this platform have (seen a dramatic) reduction in cost, which enables the business plan to be a lot more compelling,” he said.

AeroVironment might have an opening to pitch its technology as the military reassess plans for its next generation of satellites, said Bill Ostrove, an aerospace and defense analyst with Forecast International Inc. in Newtown, Conn.

“I think the military remains dedicated to satellites,” he said. “But, if they are going to move in and disrupt the market now is the time to do it, when they are in the initial first stages of deciding what future architecture will look like.”