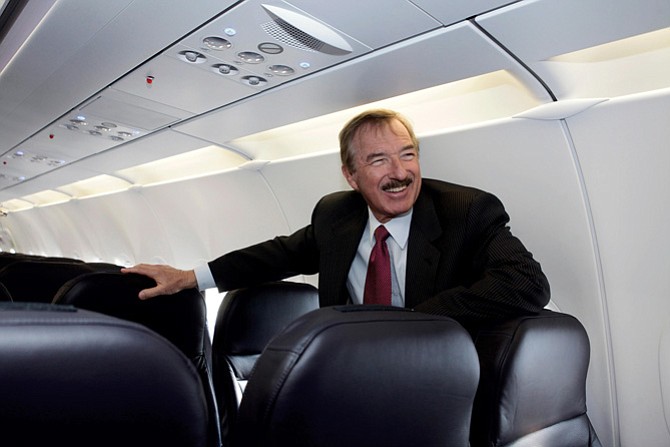 The run-up to nearly $50 per share put the Century City-based firm’s market capitalization at approximately $5 billion, more than double since its inception in 2010.

Much of the perceived value of Air Lease Corp. comes from the company’s ability to quickly supply new jetliners to rapidly growing airlines around the world – its core business.

But Air Lease, unlike many of its competitors’, now carries an added upside: an anticipated windfall for the firm coming as a result of the recent U.S. tax overhaul.

The firm is one of the few airliner lessors not based in tax-havens such as Ireland or the Bermuda. That puts it in line to have its federal taxes slashed from 35 percent to 21 percent this year as part of tax cuts signed into law in December.

The company also is benefiting from bets made in 2010 on the growth in global airliner passenger traffic. The orders the firm placed for commercial airliners with Boeing Co. and Airbus in the wake of the Great Recession came with steep discounts, and those aircraft now are being leased out at favorable rates to fast-growing airlines that operate in emerging markets as well as low-cost carriers.

Those upstart companies are typically unable to obtain new airplanes by other means because aerospace manufacturers have long lead times and there is an order backlog created by global demand for aircraft, stock analysts said.

“You just can’t open up shop today and get brand new airplanes,” said John Plueger, Air Lease’s chief executive. “There is a five- or six-year wait from Boeing and Airbus. So, it’s not so easy, no matter how much money you have, to get into this space.”

Air Lease owns 236 aircraft and has orders to buy 372 more planes through 2023 – one of the largest aircraft order sheets in the industry – according to a financial filing for the quarter ended Sept. 30.

Global demand for aircraft is expected to continue apace for at least the next two decades. Boeing forecasts a need for more than 41,000 new aircraft deliveries, valued at over $6 trillion, between 2016 and 2036. Single-aisle airplanes – the type most often purchased by Air Lease – will command the largest share of new deliveries at more than 70 percent, according to the forecast.

Air Lease is having no problem finding customers for its planes, said Jason Arnold, analyst at RBC Capital Markets.

“The durability of the business model is exemplified in the fact that 91 percent of their order book is pre-leased through 2019, as of the third quarter of 2017,” he said. “It’s pretty incredible.”

Air Lease was founded in 2010 by its Executive Chairman Udvar-Házy, who later brought Chief Executive Plueger on board; it is the pair’s second airliner leasing venture. The company’s forerunner, International Lease Finance Corp., was founded by Udvar-Házy in 1973 and sold in 2014 for $5.4 billion to AerCap Holdings.

Udvar-Házy is a pioneer of the business, according to Scott Valentin, managing director with Compass Point Research & Trading in Washington, D.C.

“He’s considered the grandfather of aircraft leasing,” he said. “He was one of the first.”

He’s not resting on laurels, though.

Air Lease achieved the milestone quickly in part because it was able to jump on the opportunity to buy commercial aircraft from Boeing and Airbus at cut rates in the wake of the 2007 financial crisis, Plueger said.

“We entered the market at a difficult time (for airlines and aerospace manufacturers) but that was to our advantage,” he said. “We were able to get orders that today people would be very hard to replicate.”

International Lease Finance’s inventory of airplanes was much more diverse, he said. Air Lease is focused on aircraft that have the strongest demand and are most common in the industry – single-aisle aircraft such as the Airbus A320 and Boeing 737.

“The vast majority of the world’s airline routes are less than 1,500 nautical miles and that’s what is the sweet spot for single-aisle aircraft,” said Plueger. “Our fleet is about 80 percent single-aisle, 20 percent wide-body.”

“The beauty of this business, as opposed to the real estate business, is these are mobile assets,” said Plueger. “We can – and do – fly them around the world from an airline that was maybe experiencing a problem to an airline that needs that asset.”

Air Lease’s 90 airline customers include Vietnam Airlines, WizzAir in Hungary, and China Southern, as well as legacy carriers such as United Airlines and Air France.

“Having an investment-grade rating is sacrosanct,” Plueger said.

Aircraft leasing businesses make their money on the spread between their long-term debt costs and the rate at which they lease out airplanes. Air Lease had $8.7 billion in long-term debt for the quarter ended Sept. 30. Its composite cost of funds decreased to 3.11 percent as of Sept. 30, from 3.42 percent as of Dec. 31, 2016.

“The two things that are most important are the cost of the aircraft and the cost of the debt. That’s it,” Pluger said. “Keeping those things as low as you can is the key to life.”