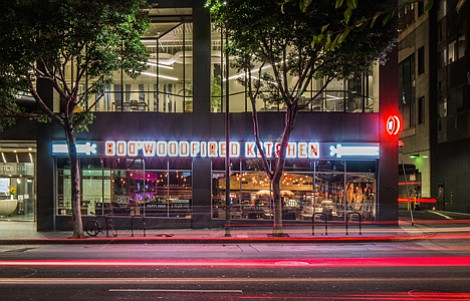 One of the original build-your-own pizzerias is heading in a new direction under a new name as the six-year-old company tries to catch up to newer competitors that are growing faster.

The Westwood-based fast casual restaurant formerly known as 800 Degrees Pizzeria recently announced it would add selections of rotisserie meats and vegetables, expand selections of appetizers and desserts, and offer cocktails at some of its 16 locations.

The moves come with a name change: 800° Woodfired Kitchen.

The company cited extensive consumer research as the logic behind the changes.

“According to our findings, the new 800°Woodfired Kitchen shows significant guest preference, drives a much broader consumer base, and attracts new users through strong appeal across multiple age demographics,” said Chief Marketing Officer Tom Bartsch in a statement.

Chef Anthony Carron and restaurateur Adam Fleishman opened the first 800 Degrees location near UCLA in 2012. Umami Restaurant Group sold the chain to Ohio family office Murfey Ventures it in 2016. The new owner has added some locations locally and abroad but also recently closed a location in Pasadena.

The company was No. 42 on the Business Journal’s list of franchisers ranked by total number of locations in 2017. Pasadena-based Blaze Fast-Fire’d Pizza was No. 10 with 78 openings in 2017 for a total of 251. Rancho Santa Margarita-based Pieology and Seattle-based Mod Pizza have also recently made inroads locally.

The latest historic downtown building to be renovated into a hotel had its soft opening this month.

Billionaire Ron Burkle’s Sydell Group debuted the 241-room NoMad Los Angeles one block southeast of Pershing Square in what once was the downtown office of Bank of Italy—forerunner of today’s Bank of America.

The 12-story building, circa 1923, had been empty for decades, according to Santa Monica-based architecture firm KFA, which worked on the project.

The full-service NoMad is one of the brands New York-based Sydell Group owns and operates. It’s the third establishment for the nameplate after New York and Las Vegas.

The company said it’s tried to preserve the feel and some of the original décor of the NoMad. The Giannini Bar off the lobby is named for Amadeo Giannini, the Bank of Italy’s founder who commissioned the building originally.

The hotel’s website lists daily room rates from $375 for standard rooms up to $875 for a suite for the weekend of Feb. 24.

Hoteliers have also recently been drawn to the San Gabriel Valley, a major destination for visitors from China.

A startup offering personalized skincare regimens raised $2.2 million in seed funding, according to the company.

Staff reporter Caroline Anderson can be reached at (323) 556-8329 or canderson@labusinessjournal.com.