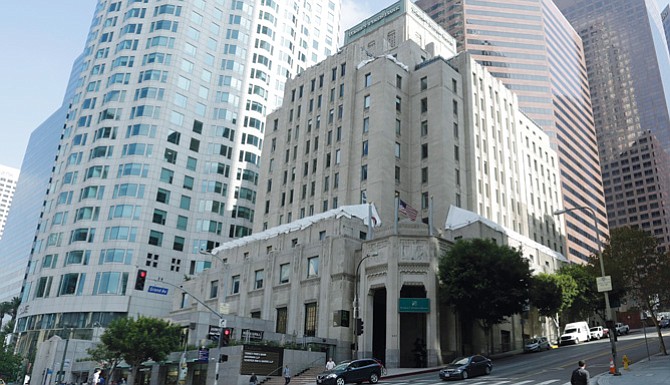 TubeScience, which is relocating to downtown from Santa Monica, signed a full-floor lease of approximately 20,000 square feet. Irvine-based Systems Source is leasing around 12,000 square feet of office and showroom space. H&M Innovation Labs, which does market research for the Swedish retailer, signed a lease for about 4,500 square feet of design space.

Sources said the building commands some of the highest rates in downtown at more than $4 a square foot.

Carle Pierose and Rob Erickson of Industry Partners represented the landlord in each of the lease deals. Andrew Sinasohn of Zacuto Group represented H&M Innovation Labs.

The CalEdison, formerly known as One Bunker Hill, is a 14-story, 277,000-square-foot Art Deco landmark built in 1930 and renovated in 1993. Rising Realty Partners owns the building in a joint venture with Houston-based real estate investment firm Lionstone Investments. The CalEdison was renovated again following its most recent acquisition in 2015.

FIRST STEPS ON $4.5B PEOPLE MOVER FOR LAX

The Los Angeles World Airports Board of Commissioners on Feb. 15 voted to take the first step toward awarding a $4.5 billion contract to design, construct and operate the planned people mover at Los Angeles International Airport. The board approved starting the process for awarding the 30-year contract to a consortium of seven contractors known as LAX Integrated Express Solutions. The contract will go again to the commission once terms are reached, and then to the Los Angeles City Council for a final vote, likely later this year. The people mover is the centerpiece of a $5.5 billion plan to modernize road and rail access to the airport, and will connect the central terminal area at LAX with a station for the Crenshaw/LAX and Metro Green light rail lines, as well as a consolidated car rental facility nearly two miles to the east. It is projected to cost nearly $2 billion to build and is tentatively set for completion in 2023. The consortium is comprised of seven prime contractors: Fluor Corp. (Irving, Texas); Balfour Beatty (London); ACS Infrastructure Development (Coral Gables, Fla.); Dragados USA (New York); Hochtief PPP Solutions (Essen, Germany); Flatiron Construction (Broomfield, Colo.); and Bombardier Transportation (Montreal).

The owner of Harbor Freight Tools USA Inc. and his foundation gave $50 million to Cedars-Sinai Medical Center to advance cardiovascular research and innovation. The gift from Eric and Susan Smidt and the Smidt Foundation, which was announced Feb. 14, marks the largest ever for the 116-year-old Beverly Grove-based health care system. The funds will be used to launch the Smidt Heart Institute at Cedars-Sinai Medical Center, officials say, enabling the hospital to expand its treatment of heart conditions through scientific research, clinical studies and training new generations of heart specialists. Eric Smidt, who is 22nd on the Business Journal’s 2017 list of Wealthiest Angelenos, co-founded Calabasas-based Harbor Freight Tools, which tied for sixth in an October 2017 Business Journal list of the largest companies in Los Angeles County, based on $4 billion in revenue in 2016. The Smidts, who live in Beverly Hills, said they were deeply moved to support their family’s local medical center, while funding Cedars-Sinai’s world-renowned heart research.