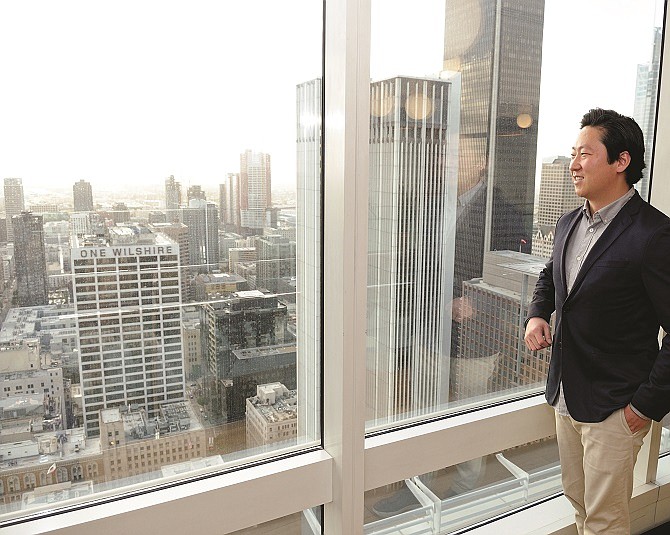 John Choi’s office in Los Angeles is in a WeWork space with an impressive view of downtown. It’s fitting that the man who serves as Airbnb’s liaison to the local community commands a panoramic view of a city that is home to 19,000 Airbnb hosts and draws 1.6 million guests each year.

Choi joined Airbnb as public policy manager more than two years ago, coming to the Bay Area-based home-sharing company after a career spent working in public policy for politicians such as Kevin de Leon and Antonio Villaraigosa and organizations such as the Los Angeles County Federation of Labor, AFL-CIO.

After the Business Journal’s interview with Choi, the Los Angeles City Council on Dec. 11 unanimously approved a set of regulations for short-term housing, which require hosts to register their properties with the city and limit the number of days homes can be rented annually without special permission. Short-term rental platforms, such as Airbnb, must ensure all properties listed on their sites are registered with the city and do not exceeded the 120-day annual rental limit.

The new regulations go into effect in July.

Immediately following the City Council’s Dec. 11 vote, Airbnb did not respond before press time to requests for updated comment about the new L.A. regulations and how they would impact the company’s business operations in the city.

Airbnb did, however, issue a generic statement after the vote urging the city to quickly create a separate ordinance regarding vacation rentals. The city council has said it plans to develop separate requirements for vacation rentals, and it will also consider exemptions to the rent-control property ban.

Choi sat down with the Los Angeles Business Journal in November to discuss his role with Airbnb and the company’s plans for the future.

How important is the L.A. market to Airbnb?

L.A. is a world-class city and a destination for travelers from all over the world. Our presence in Los Angeles has meant over $85 million in new taxes remitted to the city that is going to fund important things like services for the homeless, services for our roads and public safety infrastructure. When a guest stays in (the) San Fernando Valley or South L.A. or on the Eastside, those are dollars that are going into the pocket of that homeowner, but also our guests spend more than half of the dollars of their trip in the local neighborhoods that they’re staying in. For example, last year $330 million (was) spent in local restaurants all over the city – some certainly in high tourist zones like Hollywood and near the coast but also in areas that don’t typically have that sort of benefit.

What’s Airbnb’s response to criticism about bringing tourism into areas that aren’t zoned for hospitality?

The vacation rental market here in Los Angeles has always been part of the tourism infrastructure here in L.A. − it’s just been happening behind the scenes. People have been renting out homes on Craigslist or, before that, in PennySaver ads for decades. What we’re trying to do with our conversations with the cities (is) to say, ‘Let’s legitimize this industry. Let’s set rules. Let’s tax the industry, and let’s make sure the experience is a good one for everyone involved.’

What is your role at Airbnb?

My primary role is to serve as the point of contact for the business community, for the region’s regulators – elected officials and government agencies – as well as the broader base of community stakeholders, whether they be in the hospitality world or community-based organizations of every single kind. My role here in L.A. is to be a central point of contact to work with all those different stakeholders to make sure that Airbnb continues to grow and continues to be a positive force in L.A.

In recent years, Airbnb introduced a new initiative to move beyond home sharing to include more experiences. Can you talk about that?

We were excited to launch essentially a second business called Airbnb Experiences here in Los Angeles at the end of 2016. It has grown at a rate faster than our initial rates of growth for the home-sharing business. L.A. has been one of the most successful Experiences markets for us around the world.

This is the creative content capital of the world. We have amazing experts related to food, culture, physical fitness, spiritual activity, to folks that are passionate about their neighborhoods. It really has provided an amazing opportunity for entrepreneurs and experts of all kinds to participate and empower themselves.

We recently opened an additional office in L.A., in addition to the one we have here. We’re envisioning it to be a hub for the growth of Experiences globally. We chose L.A. for this office because it is the perfect landscape to test out every possible iteration of what hosting outside the home might look like.