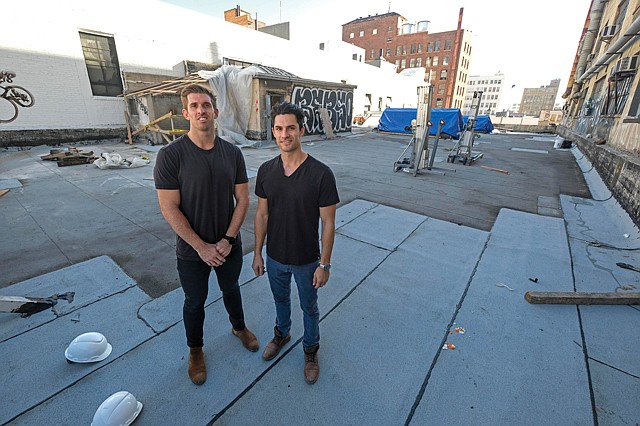 Marijuana may be legal in California, but that doesn’t mean companies in the industry are finding it easy to make a home here.

One of the hardest obstacles to overcome is finding real estate. Pot sellers, some say, are willing to pay a premium for space to grow and sell marijuana. Others associated with the industry, from law firms to marketing groups, have also faced negative reactions from landlords when looking for space to occupy.

But it’s also presenting opportunities for savvy investors, and Shelton, who is also a lawyer for pot outfits, is trying to capitalize.

Along with Bow West Capital, Green Street is offering a solution to space-hungry cannabis firms − a downtown building completely devoted to the cannabis industry. The 67,000-square-foot building is located at 718 S. Hill St., and tenants are expected to start occupying the building in the first quarter of 2019. The building is 95 percent leased already, according to Shelton, and will feature a dedicated floor operating as a co-working space run by Green Street.

“Our guys are just happy they have real architecture and real landlords,” Shelton said. “They know they can build some roots here.”

Companies taking office space at the new development include Timeless Vapes, which makes cannabis products; Dab Nation, which sells products like vaporizers and rolling paper; and Zzz Natural, which focuses on cannabis as a sleep aid. These brands will use the building as a showroom and place to do backend business, not as a retail location for cannabis products, Bow West Capital President Sean Beddoe said.

Beddoe added that the venture is currently restoring what they can of the more than 100-year-old building, which will be smoke-free and geared toward executives.

The building was purchased in 2017 for $14 million. Its remodel is being done by M-Rad Inc.

“We are trying to make it a more luxurious place, so we can give life to these companies whose revenues are strong,” M-Rad Chief Executive and founder Matthew Rosenberg said.

One difficulty cannabis tenants face is that licenses need to be tied to an address. This means companies need land before even applying for a license. Some landlords don’t want to lease to someone when there is no guarantee the tenant will get a license.

“Real estate investors want to mitigate risk by ensuring that the property they are renting will be occupied by someone who has a license,” said John Downs, director of business development of Oakland-based Arcview Group, which provides financing for cannabis-related businesses.

L.A. is not currently issuing licenses, which is slowing the process down even more.

Jason Killeen, the assistant executive director for L.A.’s Department of Cannabis Regulation, said at first, license applicants were existing medical marijuana dispensaries, then came suppliers of those applicants. The suppliers had to qualify under the city’s social equity program. In 2019, the next phase will open for general licenses. New stores can apply for these.

When applicants apply, they must use a physical address. Once an application fee has been paid, the city makes sure the address is compliant with zoning regulations. Killeen said the department can issue a total of 400 to 500 retail licenses for all phases; he stated there will be 200 to 300 new licenses available in 2019.

“Until the regulators start issuing licenses, there is a lot of risk,” Downs said. “We have seen speculators that have acquired properties in the anticipation that they will be able to get it licensed, but there are fewer investors willing to take that risk.”

“A lot of folks have left for other cities within Southern California,” Acosta said.

One of the biggest difficulties is that even though marijuana is legal here, it is not legal federally.

Justin Santarosa, a lawyer at Duane Morris, said this makes it difficult to negotiate contracts. Landlords will often have termination provisions, so they can get marijuana tenants out quickly.

Denver-based law firm Vicente Sederberg is leasing a floor at Bow West and Green Street’s downtown project. Cassia Furman, a lawyer at the firm, said many landlords are concerned by “regulatory uncertainty given that the activity remains federally illegal.”

“You cannot have commercial paper on a building and rent to a cannabis tenant,” Furman said. “The building has to be either funded by a private equity company or owned outright by the landlord. The big banks won’t lend to companies that lease to cannabis tenants.”

Downs added that banks can recall loans if they believe they are for properties being used to commit a federal crime.

Some cannabis businesses have trouble securing bank accounts and pay in cash, which some landlords do not want to deal with.

Culver City-based MedMen spokesman Daniel Yi said the idea that all cannabis businesses only use cash is a misconception. MedMen accepts credit cards and uses checks to pay its landlords.

MedMen has a handful of dispensary locations in L.A. County. The company reported revenue of $39.8 million in fiscal 2018, up from $2.7 million the previous year.

When companies find someone willing to lease to them, they are often charged a premium.

Shelton said cannabis companies sometimes offer to pay four to five times the amount other businesses do. Others put the amount closer to two to three times what other tenants pay.

“There’s a lot of risk for landlords,” Acosta said.

Some charge more because of security concerns as well.

Yi said more landlords are open to cannabis retailers now than they were a few years ago, however, partially because the businesses pay a premium.

“Landlords are realizing that there is an opportunity and that they can ask for a premium for cannabis,” Yi said. “There are only so many places you can put a cannabis store. Starbucks can put a coffee store at every corner, but you can’t do that with cannabis.”