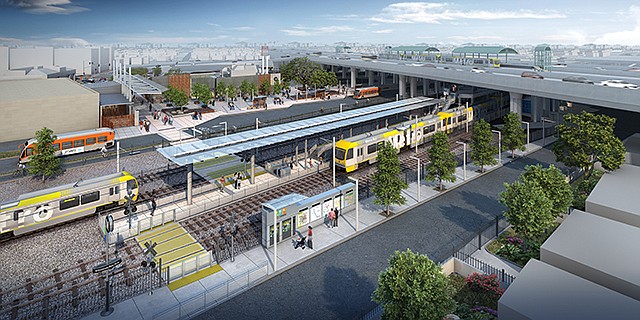 Even as L.A.’s rail transit network is adding new extensions in nearly every direction, some older parts of the system are in need of a makeover – and that means more work for area contractors.

The Los Angeles County Metropolitan Transportation Authority, or Metro, built and operates the Blue Line and its 22 stations. Metro started a $350 million project to upgrade safety and operations on the rail line four years ago, but the main portion of the work gets underway in January.

That includes improvements to the signaling, tracks and overhead wires that deliver electricity to trains. Metro is building additional stretches of tracks in some areas to reduce service interruptions, and it’s updating stations along the route, installing new digital maps and other signage, as well as painting and doing landscaping.

The rail line improvements are set for completion in late 2019 and the station improvements sometime in 2020.

The centerpiece of the Blue Line modernization is a $109 million rebuilding of the Willowbrook/Rosa Parks station where the line intersects with the Metro Green Line. Los Angeles-based Icon West Inc. is the general contractor on the Willowbrook station. Edmonton, Alberta-based Stantec Inc. is the chief design/architect firm.

The southern half of the Blue Line route, from downtown Long Beach to Willowbrook station, will close for construction from January through May while the northern half from Willowbrook to downtown L.A.’s Metro Center will close from May through September. Shuttle buses will carry riders along on those segments of the Blue Line during construction.

Other local subcontractors for Willowbrook station include: PBS Engineers Inc., of Glendora, for mechanical, plumbing and electrical engineering, and Pasadena’s W2 Design Inc. for utilities and civil engineering.

Other firms from outside the region working on the station include Raleigh, N.C.-based Kimley Horn & Associates Inc. for transit planning and civil engineering; West Sacramento’s Miyamoto International Inc. and PacRim Engineering, of Anaheim, for structural engineering.

A $44 million new art museum is taking shape on the campus of Pomona College, reaching a key milestone last month with a final concrete pour of the foundation.

The Pomona College Museum of Art building, set for completion next fall, will house the college’s art collection, which is currently on display in a 1950s-era building across the street. Allowing up to a year for transferring the collection, the new museum is set to open in late 2020.

San Francisco-based Gensler and Boston-based Machado & Silvetti Associates designed the new museum, which will contain six galleries as well as event spaces, offices and storage facilities. The U-shaped museum will contain a central courtyard with a pavilion to be used for events.

Hathaway Dinwiddie Construction Co., also based in San Francisco, is the general contractor.

The museum’s collection focuses on contemporary California artists, and it has hosted exhibitions by Andrea Bowers, Mark Bradford and Charles Gaines, among others. The museum also has been part of the Getty Foundation’s Pacific Standard Time exhibitions in collaboration with institutions across L.A.

American’s Flagship Business class, which includes fully reclining seats and a chef-curated menu, is currently available only on its route from LAX to New York’s John F. Kennedy International Airport.

“We know that business travelers flying across the country prefer a more premium experience,” she said.

American has converted the seat layout for some of its Airbus A321 aircraft, adding 20 business-class seats. Round-trip prices for the business class seats range from $1,947 to $2,147, according to the airline’s website.

Staff reporter Howard Fine can be reached at hfine@labusinessjournal.com or (323) 549-8327.