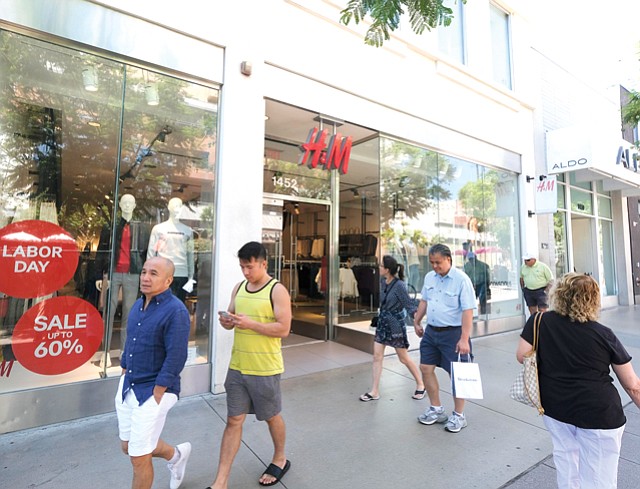 The time has come for Santa Monica’s Third Street Promenade to redo its retail.

So say city officials, some property owners and Downtown Santa Monica Inc., a nonprofit that works with the city to manage services and operations in the area.

The idea is still in its infancy, but the general notion of a retail re-imagination – or Promenade 3.0 – is gaining steam among key stakeholders. The city has set aside $200,000 for a study to be conducted this fall that will assess the needs, costs and best practices for the planned update. Officials said an announcement on the lead research firm was imminent, though they declined to give a specific date.

“The excitement of the street has dimmed – we are looking to recreate an experience and we want people to use their downtown as a gathering place,” said Kathleen Rawson, chief executive of Downtown Santa Monica Inc. “We’ve had a great 30 years since the last renovation of the Promenade, but we need to address concerns in the retail sector.”

The Third Street Promenade took shape in the 1960s, and got a major renovation in 1989. Several minor cosmetic updates haven’t stopped the street’s look from growing outdated. Many stakeholders consider it out of step with the recent changes other retail centers and malls are making – including more restaurant and entertainment tenants – to get foot traffic into brick-and-mortar stores.

Another factor in the urgency to move ahead with planning for an update is the declining sales tax revenue from the Promenade, an important source of income for the city.

Total taxable sales generated in downtown Santa Monica – which encompasses an area stretching from Ocean Avenue to Lincoln Boulevard, and from the 10 freeway to Wilshire Boulevard – came to $1.1 billion in 2017. That was down 1.3 percent compared to the previous year.

The rate of decline was more than double for Third Street Promenade, which accounted for $472 million of total sales in 2017, down 2.9 percent year-to-year.

“Our property taxes are strong, hospitality is strong, but retail needs to be looked at,” said Rick Cole, city manager of Santa Monica.

The City of Santa Monica foresees a public-private partnership for the next round of investment into the Promenade, with property owners, retail tenants and other partners involved. Cole estimates a makeover will cost between $5 million to $25 million and take three to four years to go from idea to completion.

A city ordinance prohibits office space on the ground floor on the Promenade, which leaves the second and third floors as viable alternatives.

A lot depends on how fast the city wants to move with these plans, according to Orbell Ovaness, who specializes in high-end retail for downtown-based real estate brokerage and investment firm CBRE Group Inc.

“Santa Monica is infamous for being tight and restrictive,” he said.

Ovaness represented the seller of the former Adidas and Burn Fitness building on the 1200 block of Third Street, which sold for $30 million in December. He said it’s incumbent upon retail centers to “create a place for meaningful interactions and innovative ways of shopping” alongside standard amenities these days.

The advice isn’t lost on Rawson and Cole, who both agree Third Street Promenade has been hurt by the rise of e-commerce and millennial shoppers who prefer to buy less merchandise in favor of travel, food and entertainment. So too, Rawson said, have “other new shiny things,” including the newly renovated Westfield Century mall.

There are 513 commercial properties in downtown Santa Monica, and 63 of them are between the three blocks that make up Third Street Promenade. The ownership includes a mix of families, real estate companies, and limited liability partnerships, among others.

The multitude of individual owners might be the single biggest challenge for Promenade 3.0.

“Developers like Rick Caruso and malls like Century City’s Westfield can go over the top and spend $1 billion on building something from ground up or renovating,” Cole, the city manager said. “They can curate the tenant mix in a way we can’t because we don’t own the properties.”

“Make no mistake – whenever you go to the building owners and ask them to spend money, it’s a challenge,” she said.

Walter N. Marks III is a third-generation Santa Monica property owner. His family owns the building addressed 1312 and 1320 on Third Street since 1946, he said.

His retail tenants include Miracle Mile-based Coffee Bean and Tea Leaf and Petaluma-based women’s athleisure company Athleta Inc., a subsidiary of Gap Inc. The second and third floors of his three-story property are occupied by office tenants. Marks said he could not afford to turn a blind eye to the needs of the Promenade.

“It’s time for a refresh,” he said. “Our property is at stake, our incomes are at stake, and to be an absentee landlord is to be disingenuous.”