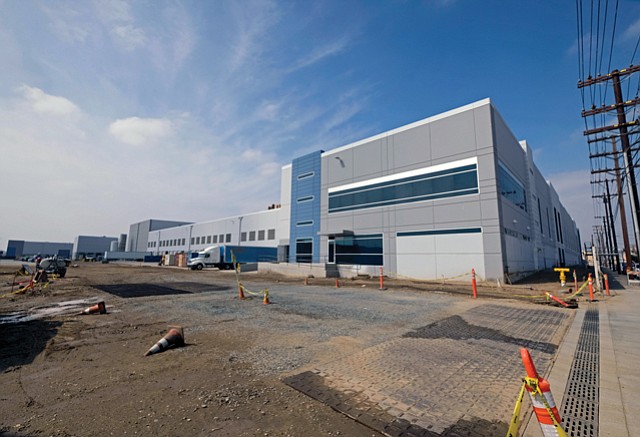 Several factors play into the makeover, including: the e-commerce revolution, a burgeoning cannabis sector and a land crunch. Vacancies are down, rents are up, and developers and institutional investors are building millions of square feet of new warehouses throughout the county.

The new properties – many of them sleek, glass, concrete and steel structures – are generating hefty rental income for property owners and are being snapped up, many by retailers spurred to compete with Amazon.com Inc. on delivery services.

Industrial is a sector that “has gotten a lot sexier in the last few years with e-commerce and everything else,” said Brett Dedeaux, principal at Dedeaux Properties, a Commerce-based industrial real estate investment firm.

Retailers need storage space and fulfillment centers closer to their customers, who want their purchased goods to arrive quickly. Indeed, the industrial sector has thrived as traditional brick-and-mortar retail has struggled.

The presence of Los Angeles International Airport, the ports of Los Angeles and Long Beach and the county’s dense population all help draw e-commerce companies and other businesses that want their fulfillment centers closer to urban areas.

Industrial deals ranged from $90 to $130 per square foot five years ago but now can top the $200-per-square-foot mark.

Dedeaux Properties sold a campus of seven newly-constructed warehouses in the City of Industry for $50 million in July. One of the properties sold for about $201 per square foot. The buildings were under contract for sale last year – before construction finished.

Hong Kong-based Austin Pang Gloves Manufacturing Corp. in May bought a newly constructed, 72,000-square-foot industrial building at 17343 Freedom Way in the City of Industry for $13.4 million, or around $185 per square foot. The company announced its plans to move its U.S. headquarters there from nearby Santa Fe Springs.

Nordstrom Inc. leased all of the newly-built Bridge Point South Bay, a 512,000-square-foot industrial space located at 20333 Normandie Ave. near Torrance. The deal came around the same time Morgan Stanley Group Inc. fund purchased the property for $102.5 million, or $200 per square foot, in April from Bridge Development Partners of Chicago. The 20-acre lot was the former site of coffee roasting plant of Farmer Bros. Co., now of Northlake, Texas, which sold the property in 2016 to Bridge for $43 million, according to CoStar Group Inc.

Cannabis is another driver behind the industrial market’s sexier image.

Cannabis distributors and cultivators have been actively renting warehouse spaces since California legalized marijuana for recreational purposes this year.

420 Real Properties, an Irvine-based firm that offers real estate listings for marijuana companies looking for smaller spaces. One Carson property of 20,000 square feet was rented – for nearly $2 per square foot – more than double the 95-cent average in the South Bay, where the industrial vacancy rate was 1.3 percent last quarter.

He suspects demand from the cannabis industry has also added upward pressure on rents.

Industrial rent in Los Angeles County shot up in the second quarter by 9.1 percent to 84 cents per square foot year over year.

In the South Bay, asking rent climbed 66 percent to 95 cents per square foot over the past five years.

Meanwhile, the vacancy rate for industrial properties in the county was 1.4 percent during the April-to-June period – up 0.3 points from a year ago, but still near historic lows. And that’s even tighter than the 1.8 percent rate in the second quarter of 2008 when real estate was at its zenith right before the Lehman Bros. bankruptcy and the bottom fell out of the economy.

Compare that to this year’s office market, which had a vacancy rate of 14.1 percent countywide during the second quarter. Even Century City, the county’s tightest office submarket, had a 7.8 percent vacancy rate.

Los Angeles County presents an attractive market – even with a land crunch and entitlement difficulties – to industrial real estate investors and companies seeking to get their goods into consumers’ hands as quickly as possible.

Burkhalter of Walker & Dunlop said his commercial real estate services firm has increased its number of industrial loans by 50 percent per year during the last four years.

“There are very few markets that have a 33 percent rent growth in the last four years,” he said.

The challenge for landlords and tenants is finding places to build in such a tight market. Lower rents associated with industrial properties, when compared to most other product types, mean new construction might not pencil out financially if land prices and new construction are too high, so companies look to build in the Inland Empire or out of state, observers said.

“We may be getting close to that point,” Burkhalter said, noting that continued technological improvements in warehousing that require fewer employees to run them might offset a larger part of property costs in the future.

The San Gabriel Valley – on the edge of the Inland Empire – was the county’s busiest area for industrial real estate construction during the second quarter, with about 1.3 million square feet of property under construction. The City of Industry has three of the county’s 10 largest industrial property construction projects currently underway.

“Industry had to sell the land that they basically had been accumulating,” said Barbara Emmons Perrier, vice chairman of capital markets at CBRE Group Inc. “That led to some opportunities for new construction.”

Others will seek chances to build. “If you can find any dirt, they’re going to move on it,” said Eric Chou, a vice president at Jones Lang LaSalle Inc.