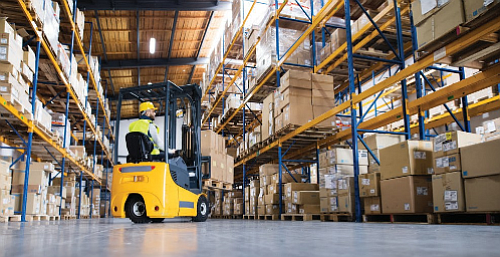 According to Dr. Hany Guirguis, Manhattan College, and Dr. Joshua Harris, New York University, the predicted increase over 2017 figures is due to the faster and broader macroeconomic growth and increased consumer spending expected in 2018.

The model, run on a quarterly basis, forecasts slightly lower industrial space demand in 2019, when inflation and interest rates are expected to rise, moderating growth. U.S. gross domestic product grew by 2.6 percent in the fourth quarter of 2017, according to the advance estimate released by the U.S. Bureau of Economic Analysis, and by 2.3 percent for all of 2017. (For comparison, U.S. GDP grew by just 1.5 percent in 2016.)

Sustained growth, especially with low unemployment at 4.1 percent as of January 2018, will translate into increasing demand for industrial properties as industrial users see more justification for investment and expansion of facilities.

Despite strong demand for industrial space, net absorption lagged behind the prior forecast. The data suggest that the root cause of this underperformance is lack of new supply. Thus, the only way for the industrial market to realize its full potential in 2018 is for additional new product to be delivered.

Space constraints are not likely the only hurdle to impede firms that use industrial space. Shortages of skilled labor are also an issue. An unemployment rate of 4.1 percent means fewerskilled workers are available for hire; this is likely slowing the rate of new hiring. The most comprehensive measure of labor underutilization, labeled U-6 by the federal Bureau of Labor Statistics, is known as the underemployment rate. It has fallen from 9.1 percent at the end of 2016 to 8.2 percent as of January 2018, the lowest reading of this measure since 2007.

The factor with the greatest potential to influence the economy in the coming years is the new federal tax law. This tax code is so new that its impacts are not yet reflected in the indicators used in this model. The lower corporate and pass-through tax rates, accelerated depreciation of equipment, lower rates on repatriated profits and other provisions should leave industrial tenants with more cash for expansion of production capabilities and facilities. Given rising broad-based demand worldwide, there is good reason to expect this will occur. Further, most U.S. consumers will see higher after-tax incomes, even in those states where limitations on state and local tax deductions will have a greater impact. As a result, consumer spending is likely to increase, generating more demand for manufacturing and warehouse/distribution facilities. The fact that e-commerce merchants are the dominant new users of industrial space will likely result in more direct connections between consumer financial health and net industrial demand.