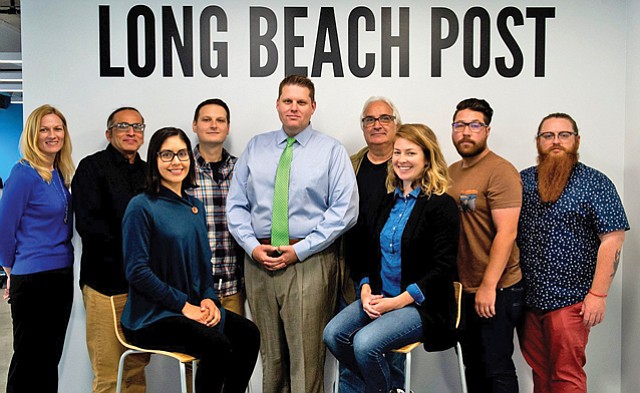 The Long Beach Press-Telegram – the city’s flagship newspaper – was down to one staff reporter in May, and its chief competitor – the online only Long Beach Post – had four editorial staff members.

Both publications have since significantly increased their editorial staff since then, beefing up the media coverage of Los Angeles County’s second largest city, which has a population of approximately 470,000, according to the 2016 U.S. Census Bureau count.

John Molina, the scion of a fortune built from Long Beach-based Molina Healthcare Inc., acquired the Post in June through his one-year-old company, Pacific6 Enterprises, for an undisclosed sum.

Molina immediately named David Sommers, a former television news producer for NBC affiliates, as publisher of the Post. The publication now has 14 employees, Sommers said last week, “with 12 of them in the newsroom,” including newly arrived reporters to cover City Hall and education.

Sommers added that the publication “launched a sports section last week helmed by two reporters who were laid off by the Press-Telegram earlier this year,” and plans to hire two more staffers in the newsroom.

The Molina purchase and recent hiring spree at the Post come after the voluntary departure in May of three members of the editorial staff of the Press-Telegram, each of whom resurfaced at the Post. The move reverberated throughout Southern California newsrooms, as it left the city’s paper of record with a single dedicated reporter for local news.

But the Press-Telegram vacancies created in May have been filled, said Southern California News Group spokeswoman Caroline Wong.

The newspaper now has reporters to cover schools and development, the ports of Long Beach and Los Angeles, crime and public safety, as well as the surfing and beach culture beat. Additionally, the publication has put a public editor and community liaison, plus the position of news clerk on its masthead.

Chris Haire, the publication’s lone reporter in May, is now listed as a senior reporter.

W Is for Digital

The evolving shift from print to digital media has changed what it means to be an advertising agency.

Others, such as 17-year-old, El Segundo-based Wpromote Inc., do traditional “Mad Men” style ad making but differ from the old days by focusing on placing the ads on digital platforms. Wpromote claims it can also swiftly collect and analyze data, providing information on website visitors to clients.

The company announced Aug. 13 the hiring of Tom Hammel away from Alphabet Inc.’s Google to be the agency’s vice president of paid media. Wpromote also touted it is organizing an advertising conference in Santa Monica next month at which it is collaborating with Google and Facebook Inc.

Company chief executive Mike Mothner stated that Wpromote is focused more on “organizational growth” of clients, who include Frontier Airlines Inc. and Home Depot Inc., which go “far beyond your typical agency relationships.”

The strategy is working, at least according to information Mothner provided about the privately held company.

Animated About the Box Office

The strongest U.S. box office performers are increasingly animated movies, which the state of California considers to be a relatively weak source of motion picture industry jobs.

FilmLA, a non-profit that the county and city designate as Los Angeles’s official film office, released a study this month breaking down the 100 top U.S. grossing movies in 2017. The study documents the rise of animated films, which accounted for 14 of the top 100 films, or double the number in 2015.

California produced four such films in 2017. But animated movies have been judged by state lawmakers and the California Film Commission to have less economic value, and are not part of the state’s tax credit program.

Gov. Jerry Brown recently signed a five-year extension of the state’s film tax credit program, which continues the policy of no tax credits for animated films.