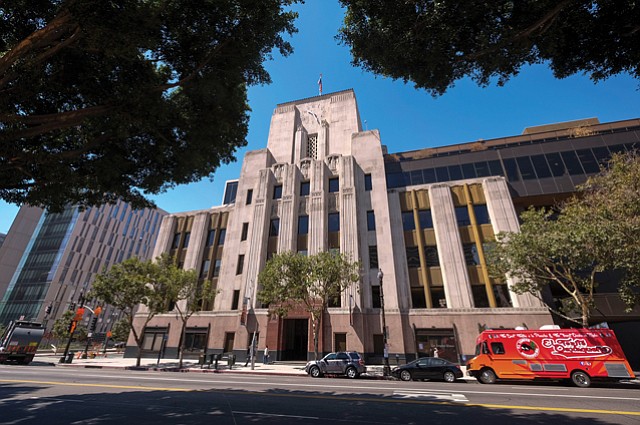 Steve Whitton, relocation services manager at the Rancho Dominguez-based Mover Services Inc., had two weeks left to finish emptying the Los Angeles Times Building when he was delivered bad news – his crew was behind schedule.

The relocation of almost the entire newspaper operation from downtown Los Angeles to El Segundo was underway, Whitton said, and his supervisor told him that six additional days of work would be required to move the furniture, workstations and dispose of trash left behind.

There was a significant problem with the timeline: The Times – recently acquired by L.A. billionaire Patrick Soon-Shiong from tronc Inc. – would incur a $1 million penalty from its landlord, Canada-based developer Onni Group, if it hadn’t fully cleared out of its long-time home by July 31.

Mover Services recalibrated its plan, got its 55-worker team up to speed and adopted a 7 a.m.-to-11 p.m. seven days a week schedule.

They got everything out of the Times offices at 202 W. 1st St. three days early. 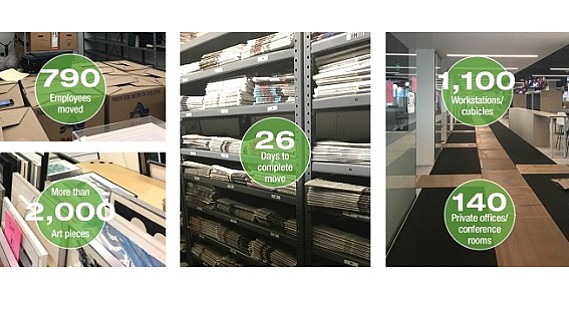 The logistics behind the move are impressive.

At least five semitrucks shuttled between downtown and El Segundo per day and around 1,100 work stations and private offices were moved in total, Whitton said.

“About 80 percent of the move had everything to do with decommissioning the work stations and private offices and getting everything out there,” Whitton said. “It was a massive undertaking.”

He said his firm’s experience working with Lockheed Martin Corp. probably factored into the newspaper’s decision to hire it for the move.

An important requirement – no price was disclosed for the job – was ensuring that unused furniture was to be given future use by other companies, Whitton said.

“We were able to get that repurposed as opposed to throwing it all away,” he said.

Some of the Times’ old furniture went to Lockheed, some to Los Angeles County government offices and some to furniture brokers, Whitton added.

Times reporters and editors were each given two cardboard boxes to haul personal items to El Segundo. The decades’ worth of journalists’ notes and news articles that had accumulated in offices and cubicles left a big impression on Whitton.

“It was like an atom bomb blew up on each floor,” he said.

About 60 trash bins were brought in at one time and typically were filled within three days, according to Whitton.

And who better than the Times to show appreciation for an outfit that more than met its deadline. The paper’s management showed its gratitude with champagne and cupcakes. 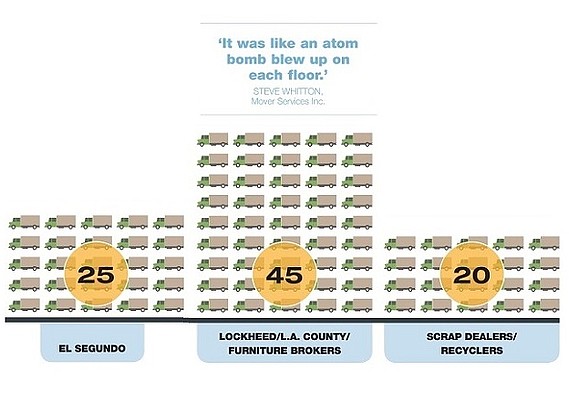 TRUCK TRIPS Approximately 90 truckloads of furniture, archival material, art, personal possessions and trash were moved out of the Times’ downtown building during the move. A healthy portion of the items went to the paper’s new El Segundo headquarters, but deliveries were also made to Lockheed Martin Corp., Los Angeles County government agencies, furniture brokers and several recyclers and scrap dealers.