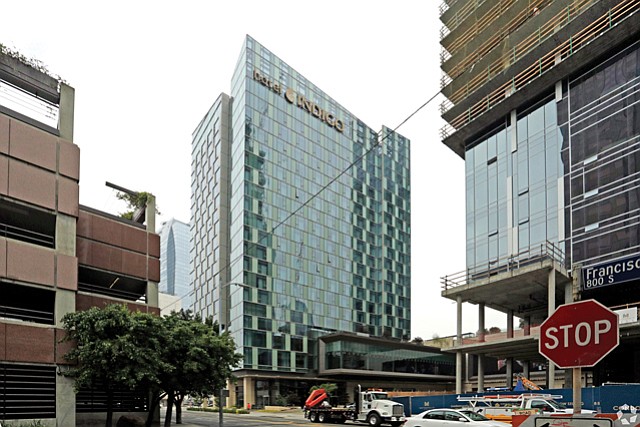 A strong economy and robust tourism sector continues to spur a boom in hotel construction locally, a trend that had Los Angeles County leading the state last year in terms of new rooms.

Roughly 40 percent of the nearly 10,800 hotel rooms that came online in California in 2017 were located in L.A. County – the most in the state, according to a report by the Irvine-based Atlas Hospitality Group.

The county also led the state with more than 5,300 hotel rooms under construction, according to Atlas, enough to make a return to the top spot likely when this year closes.

Demand has remained sufficiently brisk to keep hotel general managers happy with the additions to the market’s overall inventory, viewing it as an overall positive that creates more opportunities for conventions or visitors who previously might have been priced out of staying at a local hotel or who found all the rooms booked up.

“Newly opened hotels actually have a positive effect on the overall market because the more hotel rooms we have to offer collectively, the more we attract larger conventions and conferences,” said Jimmy Wu, general manager of downtown’s 683-room Millennium Biltmore Hotel, which came in at No. 8 on the Business Journal’s list of the county’s top hotels as ranked by room count, with a minimum of 186.

Add to that the renaissance of downtown Los Angeles and Hollywood as newly attractive go-to work-and-play destinations for visitors, business travelers and even locals looking for entertainment at or near hotels – and it’s the strongest hotel market in recent memory.

“We’re probably eight years behind where we should be,” said Mark Davis, general manager of Hilton Los Angeles/Universal City, which is ranked at No. 18 with 495 rooms, but has plans to add 300 more. “But the good news is we’re getting there.”

The construction is coming as the county prepares for several major events in the upcoming decade and the accompanying participants and fans: the 2020 Major League Baseball All-Star Game, the 2022 Super Bowl and the 2028 Summer Olympic Games.

Downtown Los Angeles has become the symbol of the county’s hotel boom.

Over the last two years, hotel revenue per available room – the money that the hotel takes in on each room – has increased roughly 23 percent to $180, according to Kelli Snyder, a senior associate at Cushman & Wakefield.

The biggest and splashiest addition to the county’s hotel market last year was No. 5 on the Business Journal’s list of top hotels, the 889-room InterContinental Los Angeles Downtown at the city’s tallest structure, the Wilshire Grand Center, at 900 Wilshire Blvd.

President Donald Trump stayed at the InterContinental last month during his first official visit to California as president.

“There has been a paradigm shift,” Snyder said. “People are not only attracted to those hotels, but there are things to do downtown.”

Downtown has continued to see a flurry of hotel-building activity.

No. 87 on the list, the NoMad Hotel and its 241 rooms opened earlier this year. No. 43, the 18-story, 350-room Hotel Indigo opened last year and was quickly put on the market by its developer, Greenland USA, and has not yet been sold, according to the hotel’s website.

The Freehand Hotel also opened last year and came in at No. 94 with 226 rooms. Hotel Figueroa, No. 71 on the list with 268 rooms, opened its doors this year after a multiyear renovation.

Downtown’s rising tide has lifted the boats of hotels throughout the county, brokers said.

“It filled a hole in the market,” said Bruce Baltin, a managing director at CBRE Group Inc.’s CBRE Hotels Consulting. “Now the market is very strong.”

W Hollywood Hotel came in at No. 55 on the List with 305 rooms, and has become a nightlife destination in its own right since its opening in 2010.

Boston-based hotel and resort company Pyramid Hotel Group opened the 288-room Sheraton Los Angeles San Gabriel in the city of San Gabriel in February, coming in at No. 63 on the list.

“New hotels for business and limited tourism travelers have been the rage in the investment hotel and development business in the last couple of years,” said Larry Kosmont, president and chief executive officer of Kosmont Cos., a Manhattan Beach-based real estate advisory firm.

The Business Journal’s related list of L.A. County’s top meeting and banquet facilities as ranked by size of the largest room has the Los Angeles Convention Center’s South Hall at No. 1 with nearly 347,000 square feet of space.