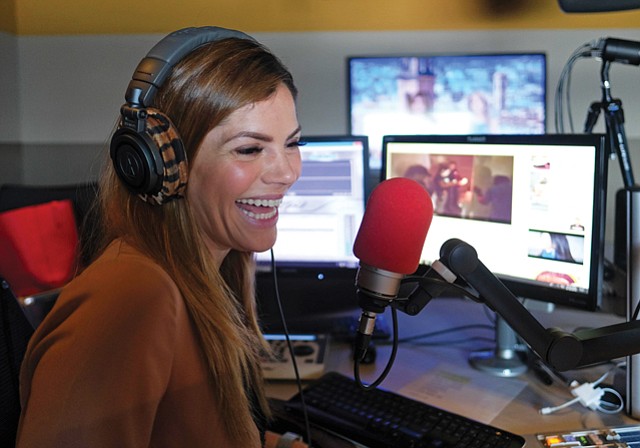 On Air: Donaji Esparza in a DJ booth at Univision’s KLEV studio. Photo by Ringo Chiu.

iHeart is headquartered in San Antonio, but owns four of the top-rated radio stations in Los Angeles, including KIIS 102.7 FM, the flagship for Seacrest’s syndicated American Top 40 program. The company owns eight overall here, and it is not the only struggling enterprise with an outsized presence on the upper reaches of the local chart.

Entercom Communications Corp., which purchased CBS Radio Inc. in November, also owns four top-10 stations in L.A., according to the February Nielsen ratings, and two others.

Lower Merion, Pennsylvania-based Entercom warned shareholders in a March filing with the Securities and Exchange Commission that “there has been a great degree of difficulty” in managing its CBS Radio assets.

Michael Harrison, publisher of radio trade publication Talkers Magazine, said that iHeart could be forced to sell assets, and that Entercom “might have bitten off more than they can chew” in acquiring CBS Radio.

The challenges facing iHeart and Entercom hold the potential to reshape the radio business in Los Angeles, the country’s second-biggest market after New York City.

Harrison said that Spanish-language broadcasters with radio operations – including Univision Inc., which already has three stations here – could make a move if the two dominant players are forced to scale back operations. So could any number of smaller outfits broadcasting in English or Spanish.

Some observers, including Adam Jacobson, a radio industry consultant, predict that, “iHeart is going to come out ahead” when it emerges from bankruptcy.

And iIHeart and Entercom each stated they had no plans to scale back.

Goldberg answered the question of whether iHeart would sell any of its eight L.A. station by predicting business as usual for its individual stations here.

Entercom, meanwhile, has seen its share price drop nearly 20 percent to around $9.60 since it acquired CBS Radio last year. It finished its first full quarter with the newly acquired operations with $246 million in revenue for the final period of 2017, a 6 percent dip.

The company contends it’s positioned for growth, however, citing in part its digital music platforms and live events.

“(We’re) well-positioned to grow and thrive in the changing radio landscape,” according to spokeswoman Esther-Mireya Tejada.

The Los Angeles radio market’s uncertain future may be partly due to the contrast between steady industry revenues, and crisis points for station owners.

Radio advertising revenue in Southern California, a market defined to include Los Angeles, Orange and San Diego counties, was about $750 million in 2017, according to George Nadel Rivin, an accountant at Miller Kaplan Arase.

Last year’s revenue improved slightly from 2016, Rivin said, and 2016 represented a modest gain from 2015. Digital media is wrongly assumed to be radio’s enemy, Rivin explained, but it’s a “double-edged sword” as companies generate income with their own digital platforms.

The fortunes of radio station owners, meanwhile, have gone up and down despite the recently steady nature of revenues for the industry.

Some of the disparity traces back to the 1996 Telecommunications Act, which allowed greater industry consolidation, Harrison said. That brought interest from Wall Street investors, who sought to build economies of scale by buying hundreds of radio stations.

The strategy came to a head in 2008, as the Great Recession was taking shape.

Private equity investors Thomas H. Lee Partners and Bain Capital executed a leveraged buyout of iHeart, which was then known as ClearChannel. The $19 billion deal closed just three weeks after the Lehman Brothers bankruptcy brought a flashpoint to the recession.

The following year saw radio advertising revenue plummet by more than 20 percent, according to the Radio Advertising Bureau, rendering the debt load taken on by iHeart’s new owners untenable.

IHeart responded in part by hiring charismatic Chief Executive Bob Pittman, who co-founded MTV when he was 25-years-old.

Pittman increased iHeart’s focus on digital, live events such as concerts, and personalities including Seacrest. Each area of emphasis generated revenue for iHeart, and, according to Jacobson, helped shore up the company’s standing for some time.

But they were not enough to pay debt obligations that iHeart listed at more than $20 billion in its filing last month in Texas Southern District bankruptcy court.

Cumulus Media requested to a New York federal judge in March a four-month extension in their own Chapter 11 bankruptcy proceeding.

The bankruptcy of iHeart, and Cumulus – along with Entercom’s financial challenge – could bring some changes on the margins among those bigger players, said Brian Weiser, analyst at Pivotal Research.

Deejays and hosts might choose to work at an Entercom station instead of its bankrupt competitors, for example.

The potential opportunities for the next tier could be more significant, especially among Spanish- language stations here.

Univision has a lion’s share of the Spanish-language radio market in L.A., including KLVE 107.5 FM, the most listened to station not owned by iHeart or Entercom.

The New York-based company’s most dramatic move would be to make a buy that gives them a foothold in the English-language market – something they’ve did in iHeart’s corporate hometown of San Antonio, where a recently acquired station bills itself as an English-Spanish hybrid.

“We are always looking for opportunities, whether it is Los Angeles or any other market,” said Luis Patino, general manager of Univision’s Los Angeles office.

But Patino’s focus is driving up the digital and event revenue in a strategy similar to what iHeart and Entercom have done.

A more dramatic market shake-up, suggested Harrison, would be a shift similar to what’s happened to print publications, with “wealthy business people who want to have a local radio station in their portfolio,” coming in as a vanity or public service play.

For now, though, Meruelo is the lone Los Angeles example of small, local station ownership.