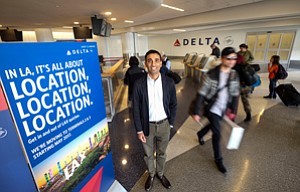 No Reservations: Ranjan Goswami is coordinating the effort at LAX for Delta Air Lines. Photo by Ringo Chiu.

Delta will operate four flights per week on the LAX-to-Amsterdam route and three flights per week on the LAX-to-Paris route. The Amsterdam flight will depart Los Angeles on Monday, Wednesday, Friday and Sunday, while the Paris flight will depart on Tuesday, Thursday and Saturday. The Paris flights will also be timed to complement Air France’s existing service between Los Angeles and Paris.

A Delta executive said that through Paris and Amsterdam, travellers out of LAX will be able to access more than 100 connecting flights.

“Los Angeles is Delta’s largest partner hub, meaning we connect more customers from Delta to our partner airlines in L.A. than anywhere else,” Ranjan Goswami, Delta’s vice president for Los Angeles and western region sales, said in a statement. “Our new Amsterdam and Paris service means we will have large partner hubs on both sides of the pond, giving our Angeleno customers convenient, one-stop connecting service to more than 100 destinations in Europe, the Middle East, India and Africa through our partners Air France, KLM and Alitalia.”

Delta is in the midst of a $1.9 billion renovation of terminals and expansion of service at LAX. Delta orchestrated a major series of terminal swaps in May for 20 airlines as part of its move from Terminals 5 and 6 to Terminals 2 and 3.