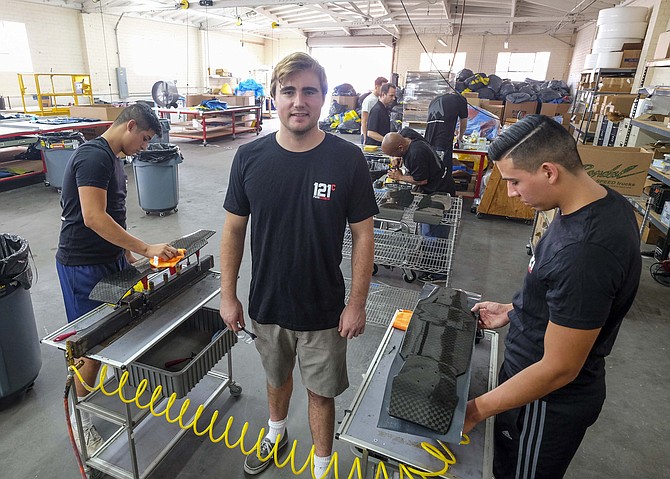 The aerospace industry throws away thousands of pounds of expensive carbon fiber each year.

That seems like a missed business opportunity to recent USC graduate Ryan Olliges.

His startup, 121C Inc., was founded to exploit the market inefficiency, and has signed multiyear contracts with undisclosed local rocket manufactures to buy carbon scrap and recycle the material into skateboards and longboards.

“We recycle from new space companies, from the production lines of modern rockets,” he said. “Sometimes it’s too small of pieces for them to use, sometimes its dated material which is beyond the spec of aerospace parts but still perfectly fine to make skateboards with.”

121C of Gardena buys about 2,500 pounds of carbon fiber a month – enough to press out 450 skateboard decks that sell for anywhere from $100 to $275. The decks are the main component of a skateboard. The company sells some standalone decks without mounts and wheels, and also offers some fully assembled products.

Sales are strong, said Olliges, with 121C generating about $100,000 a month in revenue, mostly through online retail. He expects a boost as the year-end holiday’s approach.

“We’ve been selling through (inventory) pretty much as fast as we can make,” he said. “We keep ramping up production and our sales keep increasing.”

121C was co-founded in 2015, and the name refers to 121 degrees Celsius, the temperature required to harden the epoxy that binds carbon fiber.

Olliges is a 2016 aerospace engineering graduate of USC, while one co-founder, Jaysen Harris, formerly worked as a health care IT specialist, and another, Greg Autry, is an assistant professor at USC’s Marshall School of Business.

The company has raised more than $174,000 over three Kickstarter crowdfunding campaigns, $60,000 from its founding team, and is nearing the closure of a $1 million seed round, Olliges said. The startup plans to use money raised from Kickstarter preorders and investments to buy equipment to create tooling for future products.

The company’s least-expensive carbon-fiber skateboard deck is around average for the industry at about $100, while its most expensive is on the upper end of the market for longboards at $275, said Richard Pyles, president of Hacienda Heights-based skateboard manufacturer Made in Mars Inc.

“It’s toward the upper end, but it’s not unheard of,” he said. “There’s a market, it just becomes more and more niche as you move up in price.”

“The real reason we are raising a lot of money is to expand past longboards,” Olliges said.