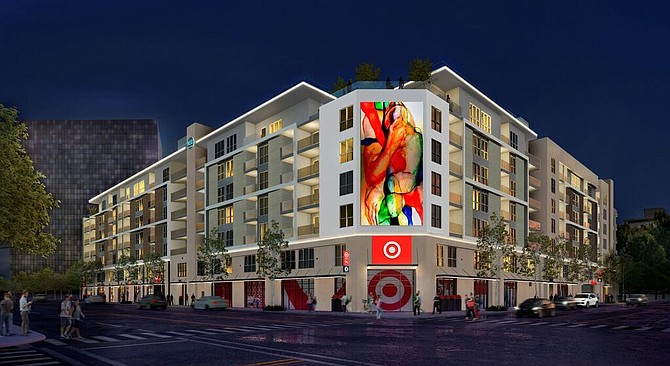 Rising: Rendering of Next on Sixth.

The Brentwood-based outfit specializes in transit-oriented, mixed-use communities, and the Target store is part of a project that keeps CWP’s firmly amid the neighborhood’s residential development boom.

The retailer will open up as part of Next on Sixth at the intersection of Sixth Street and Virgil Avenue near the Wilshire-Vermont subway station. The project is ranked No. 29 on the Business Journal’s list of Los Angeles County’s largest construction projects at a cost of $104.2 million.

The seven-story Next on Sixth – 398 units with studios, one- and two-bedroom floor plans – is one of two key projects by CWP in Koreatown. The Target will take 22,000 square feet on the ground floor, with an opening expected around the year-end holidays.

The developer’s recently completed the 476-unit K2LA apartment complex in June 2016 at the southwest corner of S. New Hampshire Avenue and Wilshire Boulevard – a few blocks from Next on Sixth.

“The rejuvenation of Koreatown is truly exciting to us,” said Steven Fifield, co-founder and principal with CWP, in a statement. “With these two new apartment communities and the Target offering, Century West is looking to meet the growing lifestyle demands of those who recognize that Koreatown is a true Los Angeles hot spot.”

CPW is busy in several other areas of greater Los Angeles, with 1,000 units in the pipeline and $1.3 billion invested in L.A. real estate.

Next on Lex is a $280 million mixed-use, transit-oriented development under construction in downtown Glendale. The project includes ground-floor retail space along with 494 residential rental units situated on six upper floors. An 8,140-square-foot retail space will be home to a Citibank branch.

Leasing of apartments is expected to begin in fall of next year, with the entire project slated for completion in fall 2019.

The Lincoln Collection is in CWP’s pipeline for downtown Santa Monica. The project will feature 270 luxury units in two apartment buildings, flanked by 20,000 square feet of ground-floor retail. The Lincoln Collection is within walking distance of Third Street Promenade and the Expo Line’s Santa Monica stop, connecting residents to downtown Los Angeles and stops in between.

Everest is a privately held real estate investment firm specializing in acquisition and asset management of apartments, retail and storage properties throughout the country. It has invested funds in excess of $200 million in more than 650 limited partnerships since its founding by Kohorst in 1994, according to the company’s website.

Everest holds a significant majority of the equity in each property within its investment portfolio, which is estimated to exceed $500 million in value, according to the company.

Terms weren’t disclosed for the deal with seller Irvine-based Khanna Enterprises Ltd., which paid $28 million for the property in San Francisco in 2014, according to industry tracker CoStar Inc.

A source with some knowledge of the property estimated the price of the latest sale at more than $40 million.

Kor, which specializes in investing in boutique hotels throughout Southern California, plans to upgrade service while finalizing long-term plans for the 12-story property at 8639 Lincoln Blvd., according to the company.

“There’s a huge need for design-driven, budget-conscious hotel options on the Westside of L.A., where business travelers are looking for easy access to Playa Vista and Silicon Beach, and leisure travelers want boutique options that serve as a gateway to L.A.’s beach communities,” said Brian De Lowe, president and partner at Kor as well as president and co-founder of Proper Hospitality, in a statement. Proper, a subsiary of Kor also based in Venice, will manage the hotel.

Staff reporter Neil Nisperos can be reached at nnisperos@labusionessjournal.com or (323) 556-8337.