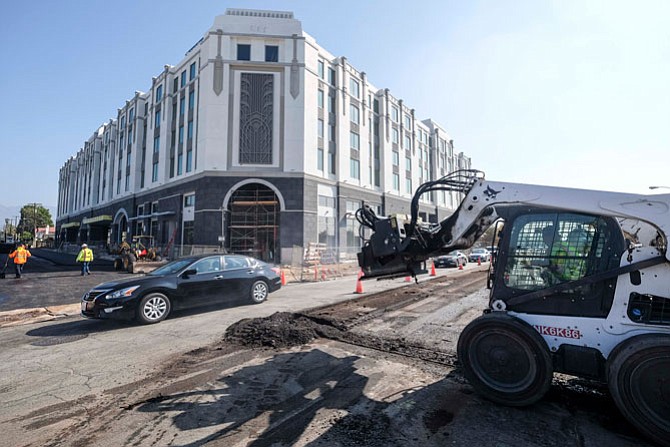 Doubling Up: A new Sheraton with 288 rooms will be San Gabriel’s second hotel. Photo by Ringo Chiu.

A China-based real estate investment firm sees gold in a new San Gabriel Valley hotel, thanks largely to recent waves of immigrants who have reshaped the eastern flank of Los Angeles County.

Shenzhen Hazens Real Estate Investment Group hopes to cash in on record numbers of Chinese tourists visiting the county with its 288-room Sheraton. The hotel, at 303 E. Valley Blvd. in the city of San Gabriel, is scheduled to open at the end of November.

The hotel is one of a handful being built in the San Gabriel Valley to cater to visitors from China, who are drawn to the concentration of Asian restaurants and prominent Chinese culture.

The majority of the 40,000 or so residents of San Gabriel are Asian and Asian-Americans, according to the U.S. Census. An additional 30 cities that combine for 385 square miles also are part of the San Gabriel Valley, which stretches east of downtown Los Angeles and nearly to the San Bernardino County line.

Many of the San Gabriel Valley cities have been magnets for emigrants from China in recent years. The arrivals have ranged from fortune seekers with hopes of grabbing the first rung on the ladder of the American dream in Temple City and other blue-collar towns to wealthy émigrés who have driven up property values in toney cities such as San Marino.

The new hotel sits in the middle of the action.

“The city of San Gabriel is really in the heart of the San Gabriel Valley in terms of there are a lot of new Chinese immigrants here,” said Teddy Yang, director of hospitality operations at Shenzhen Hazens and a 30-year valley resident. “Through past experience we know that a lot of Chinese find they like to stay in more Chinese-concentrated areas.”

Los Angeles County beat out New York and San Francisco to welcome a record 1 million Chinese tourists last year, according to the Los Angeles Tourism and Convention Board, which projects an increase in Chinese and other visitors both this year and the next.

Those numbers nearly double the totals reported by the Los Angeles County Economic Development Corp. as recently as four years ago.

The San Gabriel Valley serves a base and jumping-off point for tourists to explore the wider Southern California region, in addition to serving as a destination in its own right.

“So many Chinese tourists want to see Southern California and its attractions – Disney, Universal, Knott’s Berry Farm – but they want to lodge and eat in the San Gabriel Valley,” said Jeff Allred, chief executive of the San Gabriel Valley Economic Partnership, an economic booster group for the area. “San Gabriel Valley has become a magnet for tourism from Asia. I think it’s going to continue for the foreseeable future.”

Visits by Chinese tourists to the United States have grown since China relaxed travel restrictions, and Chinese citizens’ discretionary spending has increased. Los Angeles in particular has benefitted due to its proximity to Asia.

Chinese developers have gotten in on the action, creating a hotel boom fueled by investments through the federal EB-5 immigrant investor program, which grants green cards in exchange for investing $500,000 to $1 million in projects that create U.S. jobs.

Yet the city of San Gabriel hasn’t had many hotels historically. The Sheraton, which had EB-5 funding, will be the city’s second hotel, although it also has three motels, according to Angelica Frausto-Lupo, the city’s economic development director.

“When the owner first built (the Hilton), everyone said, Why? You’re never going to survive,” said Carl Bolte, the hotel’s general manager.

But the venture eventually proved everyone wrong. Business started taking off around 2010 with the influx of Chinese visitors, Bolte said.

In addition to having a room occupancy comparable with the rest of the county in the 80 percent range, the hotel books about 50 to 60 weddings annually, according to Bolte. It charges $179 to $209 a night for rooms.

The success of the Hilton caught the eye of Shenzhen Hazens, Yang said. Although the company, which has projects here and in China, doesn’t usually build hotels, it had success with the Sheraton Gateway Los Angeles Hotel near Los Angeles International Airport. That property was bought and then renovated for $35 million in 2013. The Sheraton Gateway has a 92 percent annual occupancy rate, according to Yang.

He didn’t share what the company expects to make in revenue or return on investment with the Sheraton in San Gabriel, but said he expects an occupancy rate similar to the Hilton in the 80 percent range and to charge around $180 a night initially and more than $200 in the hotel’s second year.

He said the hotel will represent a new high in luxury in the area. It will feature San Gabriel’s first Starbucks and steakhouse as well as a branch of Ba Shu Feng, a restaurant popular in China.

All of the amenities are designed to draw possible overflow crowds of L.A. conventiongoers, who Bolte said, sometimes stay at his Hilton.

Shenzhen Hazens will pay a percentage of its revenue to Marriott International Inc., owner of the Sheraton brand. A percentage also will go to Pyramid Hotel Group, a Boston-based hospitality managing firm that will manage the San Gabriel hotel.

The hotel, which has 19,000 square feet of indoor and outdoor event space that can accommodate up to around 1,000 people, was also built with the events business in mind. It already has banquets booked for next year, Yang said.

Meanwhile, Landwin is building a second hotel directly adjacent to the Hilton. The Hyatt Place will have 220 rooms, 80 condominiums and 50,000 square feet of retail, Bolte said. Two other hotels, a Courtyard by Marriott and a DoubleTree Hotel by Hilton, are underway in nearby Monterey Park.

“This whole area will be a destination in three to four years,” Bolte said.