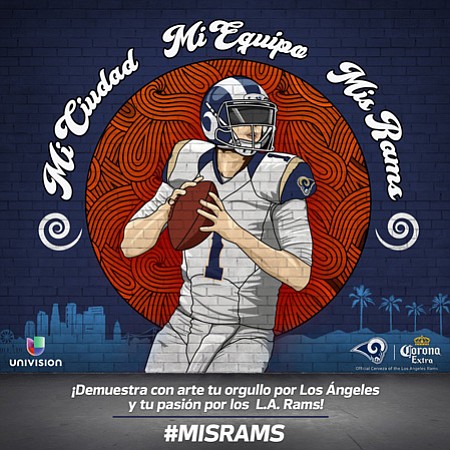 The company’s Irwindale facility reopened after a renovation under founder Jordan Meinster, who built the Pasadena-based business out of a personal desire to reduce wait times and disputed foul calls, as well as other points of uneasiness that can come when playing ball with strangers.

“PickUp USA is absolutely revolutionary for pickup basketball,” Meinster said. “We take everything that’s great about traditional pickup ball, add two refs, time all the games at 10 minutes, and let the rotation run all day.”

The recent reopening of the 14,000-square-foot facility – with a NCCA regulation-size court featuring a refurbished floor – was accompanied by food from L.A.-based Trejo’s Tacos. The gym also includes two half-sized basketball courts, a full weight room and other equipment.

PickUp USA also offers one-on-one training, catering mostly to kids, which costs $60 for 50 minutes. Group skill-development sessions are offered as well and are free to members.

PickUp USA had one other franchisee open its doors in Chandler, Ariz., but Meinster said five other locations were in the works. The company is expected to announce franchise deals in Tampa, Fla., and the Woodland Hills district of the San Fernando Valley in coming weeks. Meinster said two Texas locations and a Las Vegas outpost would be coming online as well.

Meinster said the first gym was in Irwindale because the L.A. market was an integral part of the company’s business plan.

“The end goal for PickUp USA is to continue our nationwide expansion, and bring our gyms and services to communities all across the country, including opening more locations in our original market here in L.A.,” he said.

Not a surprise from Philadelphia fans – except the game was at the StubHub Center in Carson, the Chargers’ home field in their first year back in the L.A. market.

It didn’t help that, to viewers at least, the hometown fans seemed listless for the majority of the game.

StubHub Center has the smallest capacity of any current professional football team at 27,000. The Chargers reported 25,374 tickets sold for the Oct. 1 game against Philadelphia.

There were plenty more seats vacant – sold or not – giving a clear reminder that Los Angeles has little patience for losing teams.

With National Football League Commissioner Roger Goodell at the stadium for the game, there’s little doubt the message struck home.

The Los Angeles Rams, in comparison, have been the early season darlings of the NFL, led by second-year stud Jared Goff and the resurrection of running back Todd Gurley, who has seemingly recaptured the magic he ran with during his rookie campaign in St. Louis.

The Rams are doing better than the Chargers on raw attendance numbers, but are still a long way from selling out their temporary home at the L.A. Coliseum, even with a better-than-expected 3-1 record after their first four games.

The Rams drew 60,128 attendees during their season-opening win against the Indianapolis Colts and 56,612 the next week versus the Washington Redskins. Those contests filled 64 percent and 60 percent of the Coliseum, respectively.

That leaves plenty of room for marketing efforts such as the recent “Mis Rams” – “My Rams” in Spanish – campaign. The campaign included designating the Sept. 17 game against the Redskins as a Hispanic heritage game.

The Lakers are the latest NBA team to feature a corporate logo patch on their jerseys, which debuted during their first preseason game against the Minnesota Timberwolves Sept. 30.

The multi-year pact was struck with San Francisco-based e-commerce company Wish Inc. for $12 million to $14 million, according to news reports.

“When it came to the jersey patch, knowing its prominent placement, our goal was to partner with an innovative and ambitious global company,” Tim Harris, the team’s president of business operations and chief operating officer, said in a statement. “Wish more than checks that box.”

Staff reporter Josh Niv can be reached at jniv@labusinessjournal.com or 323-556-8336.