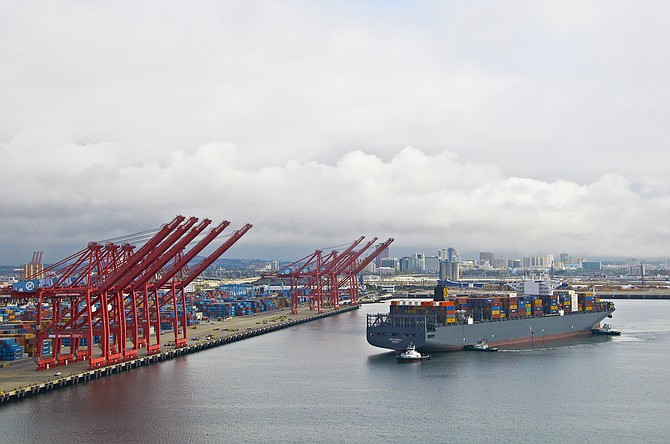 Marine terminal at the Port of Long Beach.

The ports of Los Angeles and Long Beach are on track to mint a record-breaking year in cargo movement, both ports announced this week.

The port of Long Beach recorded its busiest October in history as container volumes rose 15 percent. This time last year, Long Beach was dealing with the loss of its largest terminal tenant, South Korea-based Hanjin Shipping, due to its bankruptcy.

Imports jumped 14.3 percent year-over-year in October to 339,013 20-foot-equivalent units or TEUs, while exports decreased by 0.5 percent, to 126,150 containers. For the first 10 months, total cargo movement was up 9.5 percent compared to the same period a year ago, port officials said.

“With two months left in 2017, we’re on track to have our best year ever,” Harbor Commission President Lou Anne Bynum said in a statement.

At neighboring Port of Los Angeles, year-over-year imports decreased 8.1 percent to 383,385 TEUs and exports decreased 13.3 percent to 144,209 TEUs. However, the port is still on track to see a record breaking 2017, seeing a 6.4 percent increase in total container movement for the first 10 months of 2017, port officials said.