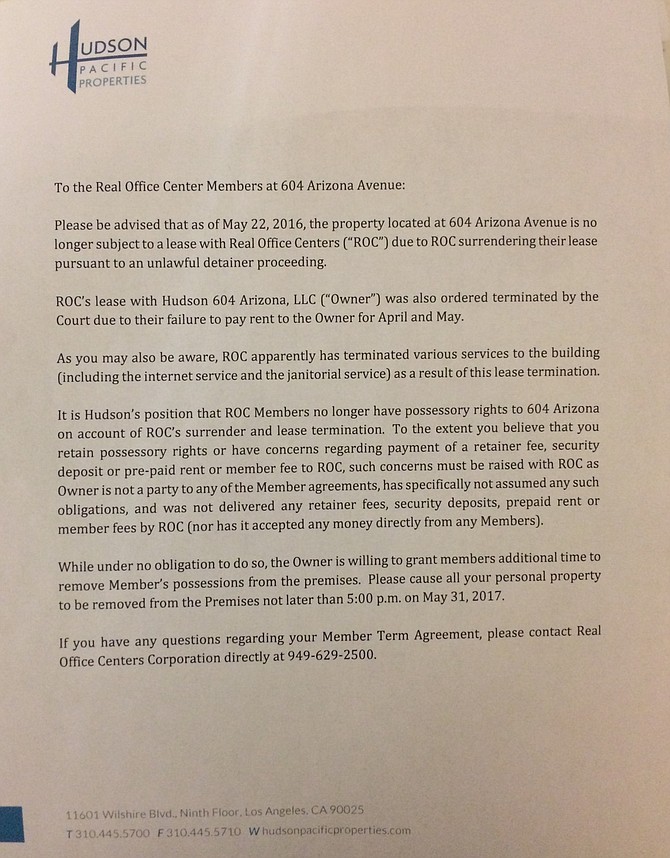 Real Office Centers and its co-working tenants at a Santa Monica building received an eviction notice Monday from their landlord, Hudson Pacific, who said the company hadn't paid rent in April and May.

The eviction of Newport Beach-based Real Office Centers from 604 Arizona Ave. came without advance notice, the company said in an email to its tenants. Hudson Pacific disputed that characterization, saying the co-working business knew of a coming court date to settle overdue payment issues.

Hudson Pacific said in a letter to the tenants that they would be allowed to collect their things until 5 p.m. May 31. The company said all co-working membership agreements were the responsibility of Real Office Centers.

The company in March also pulled out of a 15-year lease for 27,000 square feet at Atlas Capital Group’s Row DTLA in downtown’s Industrial District. That space was partially built out.

When co-working firm broke its lease at its downtown location, Ron McElroy, its chief executive, called the situation a hiccup and said the business was committed to the L.A. area.

“We had a bit of a glitch with the landlord, and we couldn’t resolve our differences,” he said.

Real Officer Centers still has a co-working office on Ocean Avenue in Santa Monica, but no accommodations have been made to help resettle about 50 businesses displaced by its Arizona Avenue eviction, tenant Kevan Rayden, co-founder and president of SwipeMarket, said Tuesday. The seven-person video production company had a $4,500 a month lease at the closing co-working office, he said.

“I’ve tried to call them multiple times. They are not calling back,” Rayden said. “I had a production scheduled today that had to be canceled. I had to send all my employees home, and I don’t know what do with them.”

Editor's note: This story has been updated to include comment from Hudson Pacific and SwipeMarket, along with other details.