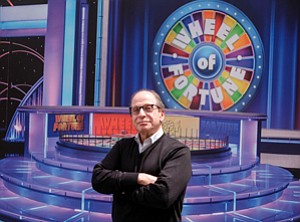 Does He Have to Spell It Out for You?: ‘Wheel of Fortune’ producer Harry Friedman. Photo by Ringo Chiu.

These two TV game shows have existed for more than 40 years, yet still draw the two largest audiences in television syndication.

What are “Jeopardy” and “Wheel of Fortune”?

The two long-lived shows will be around at least through 2020 after being renewed earlier this month, with respective hosts Alex Trebek, and Pat Sajak and Vanna White also inking new deals.

The deals provide continuity – and big paychecks – for Sony Pictures Television, which produces both programs on its Culver City lot, and CBS Television Distribution.

Harry Friedman, producer of the two shows since the mid-1990s, credits the games themselves for the shows’ longevity. He described “Wheel” as Hangman with prizes, conceding that it’s more an every person’s game than “Jeopardy,” which requires vast knowledge and the ability to recall it on demand. Both shows appeal to avid readers and crossword puzzlers, he said.

While the demographic for the shows has traditionally skewed older, Friedman said social media is changing the mix, making stars of record-breaking consecutive winners such as Ken Jennings, who holds the “Jeopardy” crown with 74 straight victories.

“It’s a little bit of revenge of the nerds,” Friedman said. “They are the cool kids now.”

A hit game-show format has a huge advantage over a scripted series when it comes to raking in the dollars. While Sony will not reveal the shows’ financials, Jeffrey McCall, professor of media studies at Indiana’s DePauw University, said game-show production costs are significantly lower than any other television content, particularly prime-time network fare.

“Many people think game shows are expensive because of the big cash prizes awarded, but those prizes are peanuts compared to the costs for talent and production of scripted shows,” McCall said in an email.

Game shows are also less expensive because they are shot in studios with fixed sets, and multiple episodes are capable of being shot in a day, he added. Except for the hosts, there are no talent costs since contestants are not compensated.

The Hollywood Reporter pegged Trebek’s yearly “Jeopardy” salary at $10 million in 2014, a number that likely increased in his new deal. It’s safe to assume “Wheel” hosts Sajak and White are also in that ball park. But given that “Jeopardy” produces 230 episodes a season and “Wheel of Fortune” keeps a similar schedule, those host salaries could almost be considered a bargain in comparison with scripted prime-time shows.

“Jeopardy” and “Wheel” each pull in between 26 million and 29 million viewers each week, according to CBS Television Distribution, and are consistently among the top-rated syndicated shows on television. That means they can also command higher ad rates than others.

Sony has produced both shows since 2002. The current iteration of “Wheel” made its debut in 1983, while the existing version of “Jeopardy” launched in 1984. The shows were originally produced by creator Merv Griffin’s Merv Griffin Enterprises and distributed by King World, which was acquired by CBS in 1999.

The shows’ formats are also licensed to producers and networks around the globe, which present customized versions tailored to a region’s cultural sensibilities.

Paul Franklin, president of CBS Television Distribution, described the shows as part of the fabric of American culture.

“There’s nostalgia, history, familiarity,” Franklin said. “They will always be there for you.”

Entertainment journalist Ray Richmond, who authored the book “This Is Jeopardy: Celebrating America’s Favorite Quiz Show,” said he believes the two shows can survive even the departure of their hosts.

“Trebek and Sajak are replaceable parts. It’s not the personalities that are the draw, it’s the concepts,” Richmond said. “I don’t see them ever going off – and that is significant, given how different the landscape of television is now, where you have streaming, and appointment television has gone by the wayside. There has never been a phenomenon like this.”