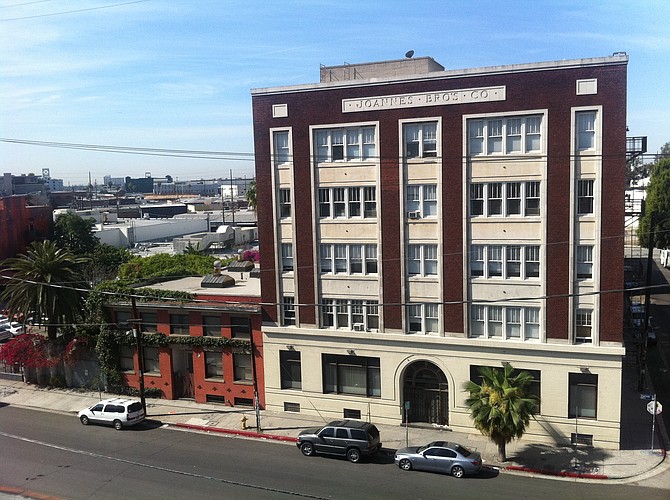 This building at 800 Traction Ave. in the Arts District and a neighboring structure were sold for $20 million.

Originally built for the Ben-Hur coffee and spice factory in 1918, the five-story property at 800 Traction Ave. was converted into artist-in-residence lofts in the 1980s. The two-story brick building next door at 810 Traction, which is also an industrial building transformed into artist lofts, also was sold as part of the deal. Taken together, the buildings consist of 15 units and ground-floor commercial space spanning 65,500 square feet, putting the deal’s value at $305 a square foot.

“They were one of the pioneers in getting the whole Arts District going,” Hillman said.

The neighborhood has matured into a bustling hotspot for development, attracting deep-pocketed investors in recent years to renovate and construct apartments, shops, restaurants, and offices. Down the block, West L.A.-based Hudson Pacific Properties has nearly completed its renovation of Fourth and Traction, a former Coca-Cola warehouse built in 1915 that is slated to offer 130,000 square feet of office and retail space.

“There’s a large amount of institutional investment coming into the Arts District,” Hillman said. “The timing was right for the seller to take advantage of the high pricing in the area. They’re not some huge real estate investment company – they’re just a small family, two brothers and their wives.”

The Arts District’s rapid transformation has caused some residents to worry the area is pricing out the artists who first infused it with creative spirit.

Hillman said he didn’t know what DLJ’s plans would be for the building. CBRE’s marketing materials say the buildings could potentially be converted into condominiums, offices, retail spaces, or a boutique hotel.

DLJ, a private equity real estate investment company based in New York, did not immediately respond to a request for comment. The firm also owns the Taft office building and Eastown apartments in Hollywood, as well as the Thornton Lofts in Venice.

Parkinson designed more than 75 buildings in Los Angeles in the early 1900s, according to the Pacific Coast Architecture Database. His works included the Los Angeles Memorial Coliseum in 1921, L.A.’s City Hall in 1928, Bullocks Wilshire department store in 1929, and Union Station in 1939.

Parkinson’s 800 Traction still bears traces of its industrial past. The name of its first owner, Joannes Brothers Co. that produced Ben-Hur coffee, is carved into stone across two facades. The other two outer walls still show the name Angeles Desk Co. painted in white letters over a green background, for Los Angeles Desk Co. that purchased the site in 1954.