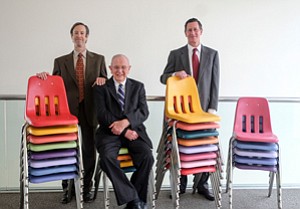 Virco Manufacturing Corp., creator of a patented three-slotted plastic chair atop metal legs, has, like its core product, never strayed from its mission.

The 67-year-old maker of school furniture has seen its fortunes rise and fall with those of the region’s school districts, which meant the company took a hit for years through the recession as education funding declined.

But as school district coffers have been replenished as the recovery has taken hold, Virco has rebounded, posting a third consecutive year of revenue and profit growth in 2016.

Schools in California, Virco’s primary market, have seen state funding rise steadily for several years, growing to $88.3 billion in the 2016-17 fiscal year from $70 billion in 2013-14.

It is a marked changed from the hit taken by public education during the Great Recession, a downturn that could not be mitigated by the 2008 passage of Los Angeles Unified School District’s Measure Q, which authorized the sale of $7 billion in state bonds to modernize old schools.

“What we didn’t expect was the severe economic downturn,” said Tom Rubin, a consultant with the school district’s oversight committee for construction bond measures. “Disbursement of funds take a long time, but the recession delayed it even more. The assessed value of the bonds also went down during that time.”

The effects were felt acutely at Virco, where sales declined from 2008 to 2014.

“We restructured by cutting our staff and downsizing a bit,” Virtue said, declining to give specifics.

There are signs the upswing will maintain its momentum for a while. In November, California voters passed Proposition 51, which authorized the state to sell $9 billion in school construction bonds. Voters also approved Proposition 55, which extended a tax on the state’s wealthiest residents to provide an estimated $4 billion a year for schools.

LAUSD also has more than $5 billion left to spend from Measure Q, which includes a provision for school furniture spending, Rubin said. It will take at least 1½ years before the district is ready to bid on projects.

Virco’s success has long been tied to the school district, which was one of its first clients.

Long before Virco founder Julian Virtue built the company into a national school furniture player, he and his brother, Phil, started another business in their L.A. backyard putting chrome plating on furniture frames in 1926.

The brothers then decided they could make the chair frames themselves, so they started another company, which led to manufacturing dinette sets and other furniture.

The business lasted for 25 years before Julian left in 1950, using a $1 million buyout from his brother to found Virco, taking it public in the early 1960s. Today, it sports a market cap of about $63 million.

“My father was convinced that servicemen returning from the war would start families and that a school construction boom would follow,” said Robert Virtue, 84, company chairman and chief executive who is Julian’s oldest son and Doug’s father.

Virco manufactures tables, storage equipment, desks, computer furniture, chairs, and other furniture. And while it caters to convention centers, arenas, and the hospitality industry, schools remain its biggest clientele.

The company has 735 full-time employees, one-third of whom work in Torrance.

“I can safely say that we are the largest maker and supplier of school furniture in the state of California,” Doug Virtue said.

Whether that’s true is difficult to determine, because little market data exists for the school furniture industry.

Jim McGarry, chief executive of Education Market Association, a trade organization for the educational products marketplace, said Virco probably is one of the largest suppliers in the state, but that the industry is difficult to quantify.

“There’s a lot of crossover with business in this niche. Segments are classified as early childhood, pre-K through 12th grade, college, and then on the flip side there’s office furniture, cafeteria furniture, and classroom furniture,” McGarry said. “It’s quite fragmented, but we are trying to reclassify terms to give us a better sense of the market in the United States.”

According to Technavio, a market research firm based in London, the school furniture market in North America was valued at $1.33 billion last year and is expected to reach $2.35 billion by 2021.

“We don’t do it all. People like choice, and our competition in L.A. is many small suppliers,” he said. “A lot of (the furniture) comes from dealers, meaning the company making the sale is not the manufacturer, unlike us, where we do both.”

Virco has kept its manufacturing within the United States because it made sense to remain close to the customer base, he said. The Torrance facility caters to its national clientele west of the Rockies, while the Arkansas outpost handles the country’s eastern half.

If a school submits an order and wants to change the color of its chairs weeks later, Virtue said it is positioned to meet the demand of last-minute changes, unlike ordering from the Chinese market where the shipment can take months to deliver without flexibility in product changes. Besides custom orders, Virco has a large warehouse where it keeps stocks of premade furniture that is packaged and delivered to customers when order changes arise.

Its staple product, those molded plastic chairs mounted on metal legs, has remained basically the same since it was created in 1964 – though they’ve gotten a bit more colorful.

“We offer 37 colors for our chairs, including paprika, wisteria, and guava,” Virtue said. “You can’t beat that.”

Gone are the days of immobile wooden chairs and desks in classrooms.

“With Stem in particular, the desks are smaller, easier to move and to set up as collaborative pods that (allow) for a more intimate type of seating for group learning,” said Mary Ellen Nobuhara, a buyer in Torrance Unified School District’s purchasing department.

This idea comes from tech companies, which commonly refer to cluster of desks in an open-space office setting as “pods.”

The K-12 district, which has 31 schools with about 24,000 students, gets 80 percent of its classroom furniture from Virco Manufacturing Corp., one of the largest suppliers of school furniture in Los Angeles and the state. The company has furnished Torrance Unified and Los Angeles Unified, among others, since the 1950s.

Desks aren’t the only classroom furniture undergoing change, Nobuhara said. Chairs, bookcases, tables, and other equipment are more mobile, too.

Los Angeles Unified, the second-largest school district in the country, serving 640,000 students in more than 1,000 schools, has seen a similar shift.

“Much of the furniture used these days in classrooms has become more ergonomic,” said Sharon Williams, deputy director of the school occupancy transition unit at the district. “The movable equipment is easier for teachers to reconfigure a room. Flexibility is the primary criterion.”

Virco is one of several vendors with which the L.A. Unified works.

Regardless of trends, some basic classroom elements have changed little through the generations. Virco’s popular Series 9000 chair, a single plastic seat and back supported by chrome legs, has had the same design since its creation in 1964, said Doug Virtue, the company’s chief operating officer.

Durability is also key, given a campus environment – Virco designs its furniture to last 10 years or more, he said.

“Our customers are taxpayer funded,”

Virtue said, “and they don’t like things that break.”