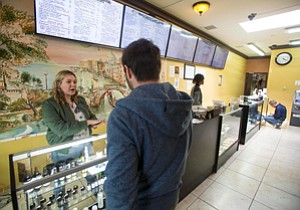 Marijuana’s march toward mainstream acceptance continued in Los Angeles last week with the passage of Measure M, which implements a tax on recreational and medical cannabis and gives the City Council the power to regulate pot businesses.

The local ballot win follows November’s statewide legalization of commercial recreational marijuana sales, victories that have emboldened industry players to emerge from the shadows and advertise their services as any other company would – with some caveats.

Because cannabis is still illegal at the federal level, TV and radio ads, which are regulated by Federal Communications Commission rules, remain a no-go. The federal classification is also causing headaches on social media, with Facebook and Instagram shutting down pages of some legal marijuana businesses, according to reports. Local and state officials are also working to implement regulations that would shield adolescents from weed ads.

“Lawmakers are concerned about cannabis industry advertising, especially as it pertains to children,” said Aaron Lachant, a partner at West L.A. law firm Nelson Hardiman who represents marijuana business clients. “They are seeking to limit the exposure children have to these ads either through an outright ban or through restrictions on how and where advertisements appear.”

Billboards seem to be a particular area of concern for lawmakers. Proposition 64, the statewide recreational cannabis referendum passed in November, put specific restrictions on how marijuana businesses can utilize outdoor signage. A follow-up bill, AB 64, which is winding its way through the state Legislature, would further tighten regulations, making them nearly identical to how tobacco and alcohol ads are controlled.

Los Angeles City Council President Herb Wesson said five or six town hall meetings have taken place since May in regards to cannabis regulation. However, he noted no constituent had raised the issue of billboard advertising.

“There are limits as to what we can tell billboard companies they can and cannot display,” said Wesson. “But we’re going to do our very best to incorporate everyone’s concerns.”

A spokesman for Weedmaps, an online platform connecting marijuana buyers with dispensaries, said the company had advertisements on at least 50 signs in the region on any given day.

THC, which has its own internal marketing and creative department, had more than 200 billboards up in October before the Proposition 64 vote, though a representative said the number has gone down significantly since then.

Both Weedmaps and THC said their ads are designed with regulations in mind and with the specific goal of reaching people ages 21 or older.

“We’re trying to follow the model put in place that governs the alcohol and tobacco industries,” said Edward Fairchild, THC’s creative director. “We’re not interested in advertising to kids. We only want to market to the 21-plus crowd.”

Many in the industry said that more ad regulations, at least at the outset, aren’t a bad idea. For example, Fairchild noted he’s been unnerved by marijuana ads that include cartoonish characters along the lines of R.J. Reynolds’ familiar and heavily criticized Joe Camel.

“Even as recently as last year, we went to conventions and saw cannabis companies advertising with cute animals or cartoons,” Fairchild said.

While lawmakers continue to push for cannabis ad regulation, there are limits to how far those can go, lawyer Lachant said. While some states do have outright bans, there’s been very little case law on the subject and free speech arguments have been successfully advanced to protect advertising in other industries.

“It’s a tricky issue because you have to balance First Amendment rights with consumer protections,” he said. “The courts haven’t really seen a lot of this when it comes to marijuana.”

There’s a big debate within the industry regarding how much advertising marijuana businesses actually need to do. Justis said that he personally doesn’t have a huge ad budget, preferring to focus on preparing for the transition from being a medical marijuana storefront to one that also sells to recreational consumers.

“We don’t spend a lot of money on advertising at this point,” he said. “Our focus is on building the business and figuring out how to go from our current clientele of patients to the new customers we’ll get next year.”

Instead of spending big bucks on advertising, Buds & Roses, which has been operating for a decade, relies more on word of mouth, social media, and the occasional celebrity endorsement. Justis said the dispensary got a huge profile boost last week when one of his customers, comedian George Lopez, posted a photo on Facebook in which he posed at the store holding a Buds & Roses T-shirt. Lopez has nearly 10 million Facebook followers.

But social media isn’t always the most ideal terrain for marijuana businesses. Facebook and Instagram restrict the posting of unlawful material, and Justis noted that the Buds & Roses’ Facebook page has been shut down. The company has instead opted to focus on Instagram, where its account is still active.

THC’s Fairchild said the company is active on social media, though an effort is also underway to expand its advertising and marketing strategy to more public spaces.

“We’re in talks with some major mainstream music events and a major film festival about sponsorship opportunities,” he said.

But how much impact will increased advertising have on these companies’ bottom line? While normal corporate entities can write off ad costs as a tax deduction, marijuana companies don’t have that luxury given their illegal status on the federal level, making such spending a much bigger hit on their operating budget.

“The opportunities are definitely there,” Fairchild said. “It’s just a matter of how much money we want to spend.”