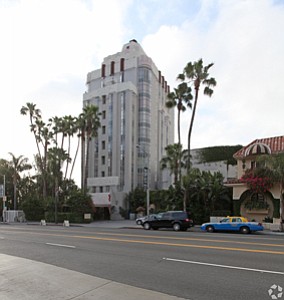 That former partner, Thai investor Thosapong Jaruthavee, purchased an 80 percent stake in the property for about $60 million in 2015 through holding company ER Hollywood. At the time, the hotel’s value was pegged at $75 million.

Klein owned the remaining stake, but he wouldn’t comment last week on whether his ownership share had changed in the deal.

Jaruthavee’s stake in the art deco hotel at 8358 Sunset Blvd. was offered up at about a $100 million asking price in February.

Sunset Tower’s average occupancy is about 85 percent, a source familiar with the business said in February. Average room rates hit $450 a night, and during Oscars week can ratchet up to $1,200.

Under Klein’s tenure, the Sunset Tower became a Hollywood hot spot that hosts the Creative Artists Agency’s annual Golden Globes party and attracts the likes of Brad Pitt, Angelina Jolie, and Lady Gaga. It hosted Vanity Fair’s annual Oscars party from 2009 to 2013, helping brand the hotel as a hub for L.A.’s entertainment elite.

Access Industries owns a collection of hotels, including the Four Seasons Grand Hotel du Cap Ferrat on the French Riviera and the One & Only Ocean Club in the Bahamas.

Although the developer had a ceremonial groundbreaking in October 2015 for the project across the street from the Four Seasons Hotel, construction did not begin at the time, according to Genton, who said the total projected cost of the project is more than $300 million.

“It was critically important to our investors and international pool of buyers that we eliminated every potential obstacle before beginning primary construction of the Four Seasons Private Residences Los Angeles,” Genton said in a statement. “While today’s challenging lending and regulatory environment pushed back our initial ambitious time line, we are now moving full-steam ahead toward setting a new standard for luxury living in Southern California.”

The Westside has had few comparable sales at those price points. The new units are all aiming for a similar clientele: wealthy international and bicoastal buyers who will pay top dollar for high-end amenities and low maintenance that come with condos attached to luxury hotel brands.

Downtown’s Ruth Group partnered with Roxborough Fund I, an affiliate of San Francisco’s Roxborough Group, to acquire the 15-story, 305,000-square-foot office tower at 9841 Airport Blvd., which is more than 62 percent leased, according to a release.

The partners plan to perform a full renovation of the office lobby and entrance, to upgrade the exterior, and rebrand the building.

“This is a unique situation where we can begin to transform a submarket with the repositioning of a major asset that will thrive with the $14 billion expansion of LAX and the public transportation system,” Bob Ruth, president of Ruth Group, said in a statement.