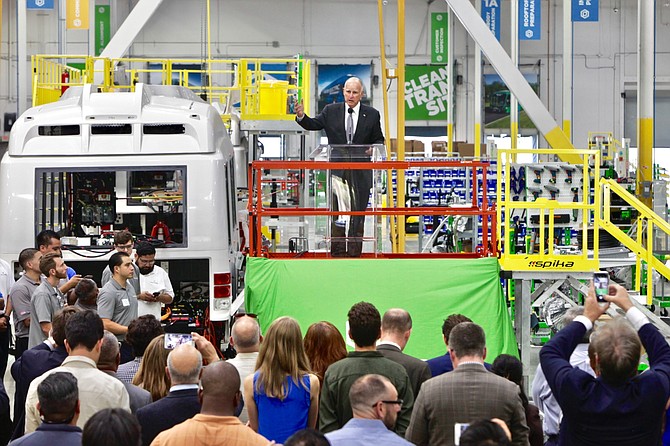 The company’s $20 million, 100,000-square-foot facility will add to its manufacturing roster that includes a battery facility in Silicon Valley and a vehicle production facility in Greenville, S.C.

“We can redirect the billions of dollars we’re spending on dirty fuel and equipment, mostly from vendors out of state, and clean up our air while employing our neighbors,” Ryan Popple, chief executive of Proterra, said at the opening ceremony for the factory.

The company expects to have 60 employees working in the new facility by the end of this year and close to 100 employees by the end of 2018. The factory has the capacity to manufacture 400 buses annually, and the company said its latest buses can travel more than 200 miles on a fully charged battery.

Gov. Jerry Brown was at the event, fresh from signing a law a day earlier allowing for California’s cap-and-trade market to continue operating past 2020. He said the switch to electric buses was inevitable.

“We are a great nation, and we’ve got to wake up, make the investments, and get the political will to get things done,” Brown said. “And that’s what’s happening here in California.”