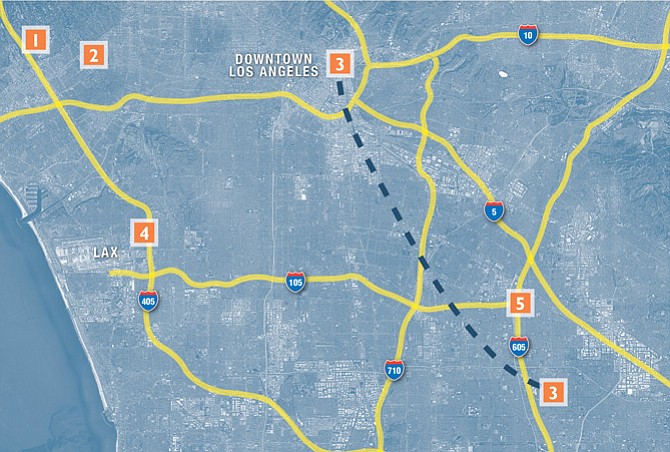 The Los Angeles County Metropolitan Transportation Authority has identified several transit projects for possible fast-tracking before the Olympics come to Los Angeles in 2024 or 2028.

Those on this map are some of the key projects that are being considered. Estimated completion dates are before fast-tracking.

The Measure M countywide half-cent sales tax approved by voters last year would help pay for many of these and other transportation projects. It is expected to raise $3 billion a year.

to Sepulveda and Ventura Boulevard in

Description: The second phase of proposed freeway and transit improvements linking the Valley, it would create a 10-mile subway, light rail or other underground transit. (A possible multitiered option is pictured.)

Location: Constellation Boulevard and Avenue of the Stars in Century City to Veterans Affairs building on Wilshire Boulevard in Westwood

Description: Third part of a 9-mile subway extension. First piece is under construction; other two parts are approved.