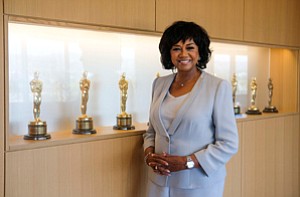 Cheryl Boone Isaacs is preparing to step down as president of the Academy of Motion Picture Arts and Sciences board of governors next month after a four-year term that some consider the most controversial in the organization’s 90-year history.

Isaacs, 67, the academy’s first black and third female president, was faced with the seemingly ironic challenge of convincing the public – and many in the industry – that the academy was not a racist institution.

The furor erupted after all-white slates of nominees were put forth in the four major Oscar acting categories in 2015. A social media campaign dubbed #OscarsSoWhite ensued, prompting a number of emotional comments from Hollywood power players, with some, including Will Smith and Jada Pinkett Smith, choosing to boycott the ceremony.

Isaacs said during a recent interview at the academy’s Beverly Hills headquarters that the organization got swept up in a national – and international – debate over diversity.

“Because there is a lot of interest in the organization, and in the Oscars worldwide, it pushed us further into the spotlight of an existing discussion going on in the United States,” Isaacs said. “It brought the debate into the glamour space, into the celebrity space.”

She embraced the circumstance.

British-Nigerian actor David Oyelowo starred as Martin Luther King Jr. in the biopic “Selma,” which received a best picture nomination that year. Despite critical acclaim, Oyelowo was not nominated for best actor. “Selma” director Ava DuVernay, who had earned the distinction of being the first black woman to direct a best picture-nominated film, was not nominated for best director. The perceived double snub became a centerpiece for the #OscarsSoWhite movement.

Oyelowo said he can’t remember which of the many post-Oscar nomination parties put him in the same room with Isaacs, but he did recall the academy president was quick to agree to a private meeting away from the party circuit to talk about the controversy.

“I think it was something that took the academy by surprise, and it took (the ‘Selma’ team) by surprise,” Oyelowo said. “Everywhere I went, I was being asked to give voice to this thing. I also felt like we were being pitted against each other, the film and the academy.”

The actor said his discussion with Isaacs wasn’t going to come close to solving the academy’s knotty problems of diversity and inclusion, but he noted the frank discussion helped the “Selma” movie makers and the academy figure out how to speak with one voice going forward.

“We had a great conversation on how to traverse the terrain,” Isaacs said.

She said the flap only highlighted the need for a diversity push the academy had already begun. She cited a 2012 Los Angeles Times story presenting statistics that academy membership was 94 percent Caucasian and 77 percent male. The median age was 62.

“When you see it in black and white … whoa,” she said. “This is not about the awards show. It’s about, who are we? Are we representing the business as it is today?”

A native of Springfield, Mass., and a graduate of Whittier College, Isaacs began her career as a Pan Am flight attendant out of San Francisco in the early 1970s, because the job offered her the opportunity for free travel. In her mid-20s, she followed her older brother, the late Ashley Boone, into the world of movie marketing for major Hollywood studios.

She began her publicity career in 1977 at Columbia Pictures, later serving as publicity director for Paramount Pictures and New Line Cinema, among others. She has been a member of the academy since 1987 and came to the leadership post from its PR branch.

“We were the institution that people could point to for good – or evil,” Hudson said. “She had a great point of view about the inner workings of both Hollywood and the academy. I felt privileged to be that close to her grace under pressure.”

Isaacs said the general public tends to misunderstand the complexity of the academy and its multiple voting branches.

“I’ve had people come up to me and say, Hey, Cheryl, why didn’t you give Will (Smith) the Oscar? And you go, OK, how far into this discussion do I need to go? It’s not me personally. Everyone has a single vote,” she said.

Smith starred in “Concussion” in 2015 and did not receive an Oscar nod for best actor even though he was nominated for a Golden Globe.

The #OscarsSoWhite campaign has had a lasting impact in that it led the academy to hasten its efforts to diversify international membership. The organization invited 683 new members last year, 46 percent of whom are women and 41 percent are people of color. Last month, it offered membership to a record 774 film industry professionals – a group whose numbers are 39 percent female and 30 percent people of color.

Isaacs tends to downplay the significance of her own race and gender in her long Hollywood career.

“You do that and it’s over from the start,” she said. “People say to me: What did it feel like to be the first African female (president)? It’s kind of a hard question for me to answer, because I’ve always been an African-American woman. What, in a world of a lot of white people? I mean, I’m in America.”

Oyelowo said he believes Isaacs’ visibility as a black woman leveraged her power to change the game.

“Something I’ve come to realize with the entertainment industry is, rightly or wrongly, perception is to a certain degree reality,” he said. “It was the perception of power in a very white and male-dominated institution. She was able to get into rooms, get in front of people. She did more with that position than I would argue has been done in the past.”

Isaacs reiterated that however rocky the #OscarsSoWhite controversy might have been, it served as a catalyst for changes the academy was already ready to make.

“It’s still moving toward a goal,” she said. “I think these last couple of years have been just that.”

The academy’s board is set to elect a new president on Aug. 8. So, what goals does Isaacs have for herself now that her academy tenure is coming to an end?

Making movies, for a start.

“The idea of creating, which I have not done, is very interesting to me,” she said. Isaacs added that she’ll likely continue to teach film marketing, which she has done on and off for 20 years at various colleges, including USC and Chapman University.

Isaacs said she will continue to lead the discussion of inclusion wherever she ends up.

The relentlessly positive Isaacs has even found a silver lining to the show-stopping gaffe at this year’s Academy Awards that saw Faye Dunaway announce “La La Land” as best picture instead of the actual winner, “Moonlight.”

The gaffe was reportedly prompted by a PricewaterhouseCoopers representative handing the wrong envelope to Warren Beatty.

While many observers noted it took a long time for the mix-up to be corrected, Isaacs said the production team responded quickly once they realized the mistake.

“It was 2½ minutes,” she said. “What I will always say about that situation was, the show was fantastic. It was everything that you want from an Oscar show. When it’s perfect, everybody says there are no surprises.”