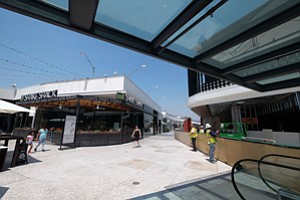 Westfield Century City jumped 19 spots to claim the No. 7 slot this year on the Business Journal’s annual list of largest retail centers in Los Angeles County, a rise stoked by a $1 billion renovation that makes the property a standout in a mostly unchanged industry ranking.

Westfield’s expansion isn’t just about size, according to executives with the company, which counts Sydney-based Westfield Corp. as its parent.

The Century City makeover also is an attempt to rethink the mall experience, as shopping centers have struggled and retailers have shuttered under increasing pressure from online sales. Westfield Century City and other retail centers have been adding restaurants, gyms and other features to make going to the mall more experiential.

“What you want to be able to do for the customer is first make it immensely pleasing, but then you want to surprise them and have something memorable, whether it’s inside the store or outside in the common areas, and we’re really working quite hard to do that,” said Chief Operating Officer Bill Hecht.

Amazon.com Inc. will open its first L.A. Amazon Books store in a 5,227-square-foot suite in the retail center later this fall. This will be the first of potentially other Amazon stores at Westfield locations.

The other retail centers on the list displayed minimal growth in terms of space and the rankings remained relatively static, reflecting a struggling environment for brick-and-mortar stores.

Many of the malls are renovating in response to changing shopping trends.

About 79 percent of Americans are now shopping online, up from 22 percent in 2000, according to a December report by the Pew Research Center.

Yet malls in America grew more than twice as fast as the population between 1970 and 2015, according to analysts at research and investment firm Cowen and Co. This means there is 23.5 square feet of gross leasable space per person in the nation.

The ample supply of space and draw to online shopping present major issues for retail centers, leading malls to spruce up their walls and offer more experiential and hospitality-related services.

“I think the retail centers are going to have to find what the new normal is in the world of internet shopping – they have to offer something that the consumer can’t get online, so that would be some sort of an experience, whether it be with entertainment or product that they can’t get online,” said Connie Cashin, president of Cashin Marketing Consultants in Sherman Oaks who has been working with retail centers in the county for more than 40 years.

Westfield Century City is trying to combat the e-commerce wave and stay relevant to its customers by opening its doors to luxury fitness center Equinox and fitness boutique Glove Works, and it plans to soon open the West Coast’s first Eataly Italian marketplace.

The center is experimenting with new technology to enhance users’ experience. It recently launched frictionless parking, allowing customers to pay with their license plate and avoid a paper ticket, and is planning on offering reserved parking for regular customers, he said.

Hecht said Westfield Century City is in phase two of construction and will have a plethora of new stores open by October.

The mall’s parent owns six out of the 25 retail centers on the list, five of which are in the top 10.

Other shopping centers are working to evolve their offerings as well.

No. 21 Beverly Center, located at the edge of Beverly Hills and West Hollywood, is undergoing a $500 million renovation to be completed next year. The eight-story, 884,000-square-foot structure will open a gourmet food hall and a row of street-level restaurants among other retail stores.

“For us, it’s really about treating a really well-rounded customer experience and customer journey, and I think that’s something that you’re seeing and will continue to see in shopping centers and retail in general, especially in L.A.,” said Ralph Barnes, the Beverly Center’s general manager. “Experiential is a huge component and I think it’s multifaceted.”

The shopping center offers a same-day retail delivery service through third-party company Deliv, appeasing those that like the ease of online but are short on time.

“Before, it was about window shopping and maybe grab something to eat,” Barnes said. “Today, it’s something that you really want to come experience – amazing food, learn about the latest technology and trends of how it’s being used in the retail industry, and it’s really kind of becoming the new place for the community to gather and experience a lot more than your traditional shopping.”