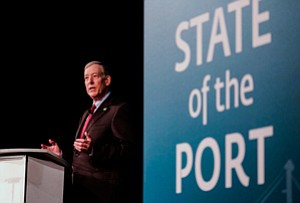 While the port’s cargo volume isn’t totally dependent on new trade agreements, port officials were watching for the TPP to potentially boost U.S. exports to Asia, he said after giving the annual State of the Port address at the Long Beach Convention & Entertainment Center.

Kenagy said, however, that the Long Beach Harbor Commission never took a position on TPP and that it’s way too early to assess impacts.

Harbor Commission President Lori Ann Guzman noted after the address that China remains the port’s largest trading partner. The TPP was designed to ease trade obstacles with 11 other Pacific Rim countries from South America to Asia, but not China.

In addition to opposing the TPP and announcing plans to renegotiate the North American Free Trade Agreement, Trump’s complaints over the U.S.-China trade deficit have stirred concern of new tariffs or even a trade war.

The uncertainty couldn’t come at a worse time for U.S. ports.

The seventh-largest cargo container mover in the world, South Korea’s Hanjin Shipping Co. filed for bankruptcy protection last year, a symptom of an instability facing the shipping industry worldwide. Hanjin was the largest shipping company by volume at the Long Beach port and had a majority stake in the operator of the facility’s largest terminal.

As Hanjin ship movement ground to a halt, Long Beach saw imports and exports plummet each month of the final quarter of 2016 compared with a year earlier.

A U.S. bankruptcy judge signed off earlier this month on the disputed sale of Hanjin’s stake in the Pier T terminal operator to Geneva-based Mediterranean Shipping Co. for $78 million, while relieving $54 million in debt.

Kenagy lauded the transition and said that in the coming year as MSC shifts cargo to its new terminal full operations will resume at Pier T.

He said the port is also making moves to further modernize and improve operations, including adding to the port’s on-dock rail infrastructure in order to increase from 25 percent to 50 percent the amount of cargo that can move directly from ship to train. This would make moving containers more efficient and reduce air pollution by relying less on trucks, he said.